I’m Aaron. Some people call me ADB. I make words happen. Sometimes people buy the words and like the words, which I appreciate.

I wasn’t expecting to have to go first with the intros, and I actually wrote mine last, after Col, Ross, and Dr. Mark were all finished theirs. So, uh, hello. This is my group’s hobby blog. Welcome! We’re by no means the greatest or fastest painters, but we wanted a decently organised project log somewhere that wasn’t the gang’s eternally disorganised secret Facebook group. We’re hoping it’ll help motivate us.

Here’s a brief Who Am I, which I’m doing because I was told I had to. If you’ll excuse me lifting chunks from my recent AMA on Reddit, and then sneakily adding a little more to it below:

I played a little 40K in 2nd and 3rd Edition, and a bunch of one-off 40K games in 5th and 6th Editions with small, unpainted armies here and there (Eldar, Chaos Marines, Space Marines, etc.) but it mostly just reminded me how much I missed playing Fantasy or how I’d rather be playing Necromunda.

I think I’ll always hate painting, but my favourite 40K models are the Adeptus Mechanicus and the Genestealer Cults. The former are my fave 40K faction in general (maybe tied with Eldar of various kinds…?) and their model range is mouth-wateringly awesome. The latter are probably my fave models in the history of GW. (Plus, they have awesome lore, too.)”

That’s all true, but not the whole truth. (It was an 8-hour Q&A session, and I was trying to be brief.) I used to play a bunch of Blood Bowl and Epic 40,000, too. My fave game(s) that I’ve ever played are still my old points-less “play whatever you’ve got and we’ll invent a scenario” games against my regular Epic opponent, who played Eldar. Things like “You win if you destroy the holofield generator on top of this building” or “You lose if this bridge gets destroyed”.

They were massively unbalanced. Oh, man. His army was usually like 2-3 times the size of mine. I’m sure the scenarios would’ve made a certain subsect of tournament players bleed from the eyeballs (and maybe from other, more exciting places, too) but they’re hard to beat in my rose-tinted reflections.

To date, I’ve painted somewhere around 13 minis to completion:

Seriously, that’s pretty much it. And I’m 37 now. That’s not a great record.

I paint a lot of scenery, though. I always feel like that takes priority, since it’s for everyone in the group, everyone gets use out of it, and a decent-looking table is a great foundation for cool narrative games. 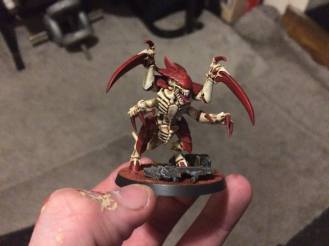 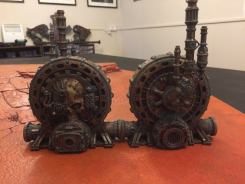 I’ve consistently failed time and time again to play with a painted army. Part of the reason I was on board for our group doing a hobby blog was to break that endless, shameful cycle of naked plastic.

And, for the record, I was against the name of the blog. I don’t legitimately go around naming buildings after myself. It was supposed to be a joke, I swear.