So a slight change of plan with our ‘doing our leaders first’ thing. Our Skirmish warbands are going to start out at 35 points, which gives us a few more options for building our starting forces, and lets Mark and Aaron fit in some of the characters and models they actually want in their main armies. Because the Sylvaneth can fit a Branchwych into a Skirmish warband it doesn’t much alter my plans, so I’m going to stick with her first and then add on a Kurnoth Hunter and a couple of dryads to round out the 35 points.

Fluff-wise, I see the dryads as the Branchwych’s handmaidens, and the Kurnoth Hunter as her chosen champion/bodyguard. The Wych has felt a disturbance in the aether from the death of the godbeast, and has come to investigate lest anything pollute the forests she protects. I’ll pad out the fluff later on as I get a proper feel for the faction and the warband.

This week I’ve been focusing on getting the whole starting warband built. I wanted to do some conversion work on the Branchwych, as I felt the base model is nice, but doesn’t have much presence, especially when she’ll be facing up to the likes of Stormcast, Ironjaws, and Top Hot Sky Dwarves (stay tuned for those). Beside those models, the standard Branchwych looks less of a tree-lady, and more of a house-plant-lady. So I raided the Spite-Revenants box for one of their more imposing bodies and grafted on the Branchwych’s head and arms and some other bits. It would have been easy to just swap the head of the scythe for the one on the Revenants’ Protector Glaive, but I really wanted to try and retain the pose from the original model so that it’s easy to work out what she is. I’m a bit rusty at the conversion game though, so her arms are a bit wonky, but I can pretend it’s because she’s part tree and things aren’t quite in proportion anyway.

The Kurnoth Hunters are great models so I’ve pretty much left my first one as he comes in the box. I was going to go with a bow guy, but felt I’d need some melee muscle to start with, and the charging sword pose has so much energy to it. I’m not a fan of their weird grin however, so I’ll be breaking out the green stuff to modify that a bit. Here’s something really annoying though – the instruction manual for these guys is wrong. I wanted to build this guy… 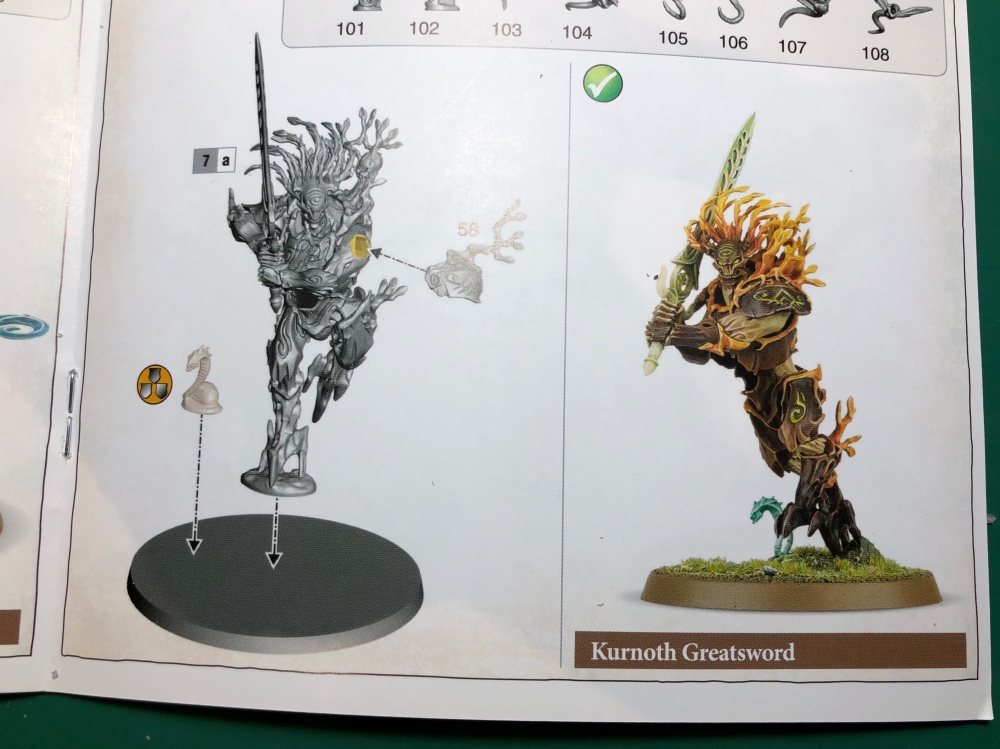 …these two models are not the same guy. Grrr. I can see how whoever made the booklet got confused, and it’s my own dumb fault for not noticing when I stuck on the arms, but I was concentrating so much on getting the arms to fit together that I didn’t notice the sword wasn’t leaning backwards. So now I’ve got a treeman running along balancing his giant sword like it’s the olympic torch. And I can’t just build the other running guy with the right arms because I’ve used the champions head and shoulders on this first one. Very annoying, but it’s not like he looks bad. All three poses are great, but it’s just not the one I wanted. Anyway, moving on…

The dryads suffer from the same diminutive stature as the Branchwych, but at least their stats are more reflective of that, so I don’t mind building them pretty much as they are, and I’d struggle to covert 20+ dryads and still have enough energy to paint them as the end of that. I understand they spend most games hiding in forests, so harsh as it may be, I don’t think they warrant too much special attention in the conversion department. That being said, the dryad minis are much nicer in the (plastic) flesh that in the pictures, and they have a bit more bulk than I was expecting, so I’m pretty pleased with how they turned out.

There are a few more photos of the Branchwych over on the Instagram account, if you wanna check those out.

Next up is the painting. I’m not sure if I’ll get them all done over this coming week, but I’m certainly going to try and finish the Branchwych. Although I still haven’t actually decided on a colour scheme yet. I don’t think I’m going to go with any particular glade because the colour schemes section in the Sylvaneth book doesn’t really do a good job of differentiating them, and there’s no painting guides. Plus, y’know, they’re all just tree coloured at the end of the day.

I’m torn between these two, I think. 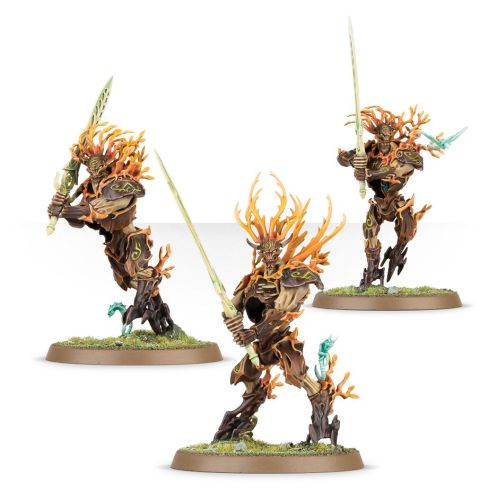 Basically either brown and green, or brown and orange. For the Branchwych and future Tree-Revenants, I’m going to do the skin the spectral blue colour on the studio models, and the dryads will be that dark brown bark colour on those Hunters. I’m leaning towards the classic green and brown.

Oh, and on a side note, I was in GW Belfast yesterday picking up some paints for this lot, and I got chatting to the very friendly and helpful Michael, who dug out their very tree-heavy AoS scenery for me to have a look at. I’ll obviously be picking up some Wyldwoods in the near future for this lot, and Michael was kind enough to share their recipe for the paint scheme, which could prove to be very useful. It gave me some good ideas for our own Ghur scenery as well. Here are some photos! 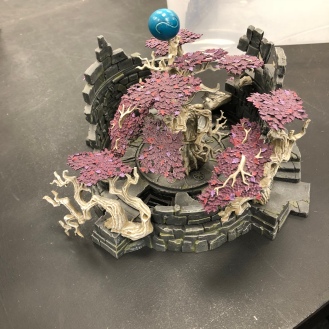 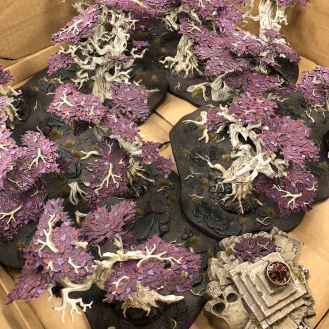 Thoughts and comments are very welcome, as always!

(And in case you’re wondering, yes, every blog post title is going to be a terrible tree pun.)

6 thoughts on “Branching Out”