The start of my grand painting adventure has been delayed this week on account of, in order, rain, snow, sub-zero temperatures, snow, rain, and more rain. Good old Ireland. I don’t have an indoor spray painting sanctuary, so I’m very much at the mercy of the elements. It did however give me a few days to pause for thought and have a proper think about how I’m going to approach these big dumb trees.

I’ve been humming and hahing about a paint scheme, and I moaned about it last week so I’ll not prattle on again now, suffice to say that I’ve settled on a scheme that roughly mimics the standard green and brown. I like the autumn colours look but every man and their dog seems to do Sylvaneth that way. I know, however, that nobody wants to look at pictures of unconverted models painted in the studio colours but worse, so I’ve been thinking about how to mix it up a little to keep it interesting for both myself and you guys.

Two of the big sources of inspiration that have been bubbling around in the back of my head will probably be no surprise to many of you. The first are the Aelves of the Black Sloth Hell by Jake from Ex Profundis, whose use of colour and, in particular, texture is mind blowing. How he creates leaves, moss, grass and slime (to say nothing of the sublime conversions) to summon these intensely organic pieces of art is enviable.

The second muse I hope to feebly channel is FPoA over on Ironsleet. His Crataegus Legionnaires and Thorne Guards are once again a masterclass in the use of texture and natural materials to elevate already spectacular paint jobs and conversions. I’m currently trawling though his Instagram comments like a rabid stalker to glean any nuggets of information into his techniques.

Because we’re aiming to get full armies churned out, and hopefully not take three years to do it, I don’t have the liberty of meticulously converting every model into some transcendent piece of art like the hallowed gentlemen above, so I’ll have to keep my conversions relatively tame, restrict them to the characters and such. But I can certainly try my hand at the texture work and maybe get a bit adventurous with my basing, so to that end I dived in behind my sofa (where all my hobby supplies live) and pulled out whatever I could find that might help. 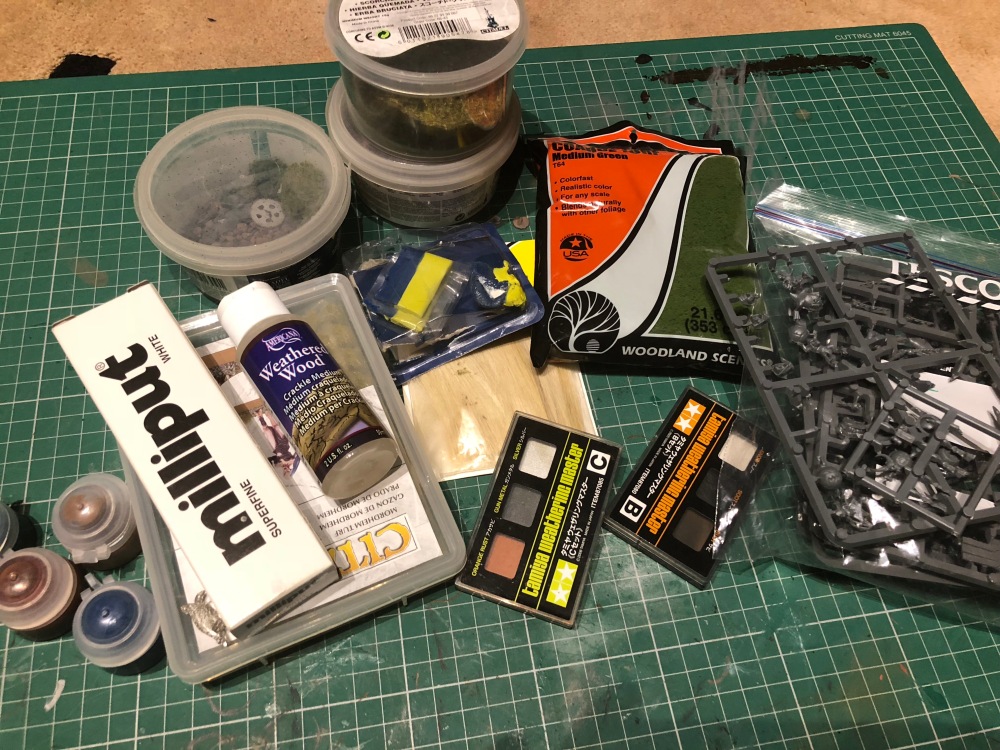 Having a sizeable collection of WWII 28mm stuff for Bolt Action, I’m no stranger to excessive weathering and sticking bits of trees to my models, but I’ve never done it with GW stuff on account of them being more…what’s a nice way to say ‘cartoony’? Hopefully it’ll look something like Jake and FPoA’s above, but I somehow doubt that. I considered this kind of thing way back when I first chose Sylvaneth, but then I got caught up worrying how they’d look beside any hypothetical allies I might add in the future. But to hell with that. I’ll have some fun and try some new stuff, and if it’s an unmitigated disaster, I’ll shoot the lot out an airlock and try something else.

As soon as the snow clears I’m going to venture out into the back garden and try and find some of that broken slate that I’m sure is lurking somewhere near the bottom, and maybe sticks and bits of bark and moss and stuff that I can bake in the oven and use for decoration. I almost bought a box of sticks yesterday for £4.50, but the guy in the shop (rightly) gave me such a hard time about it that I eventually saw sense. FYI, if you think GW is expensive, take a wander into a model railway shop and check out the Woodland Scenics range! I’ve also started collecting all the little bits and bobs from my various sprues that can be used as base decoration. The Sylvaneth range has plenty of little waystones and skulls and branches that I can put to good use, and I might pick up that big pack of skulls that GW does.

And I built these guys, if only to have some actual progress to show. 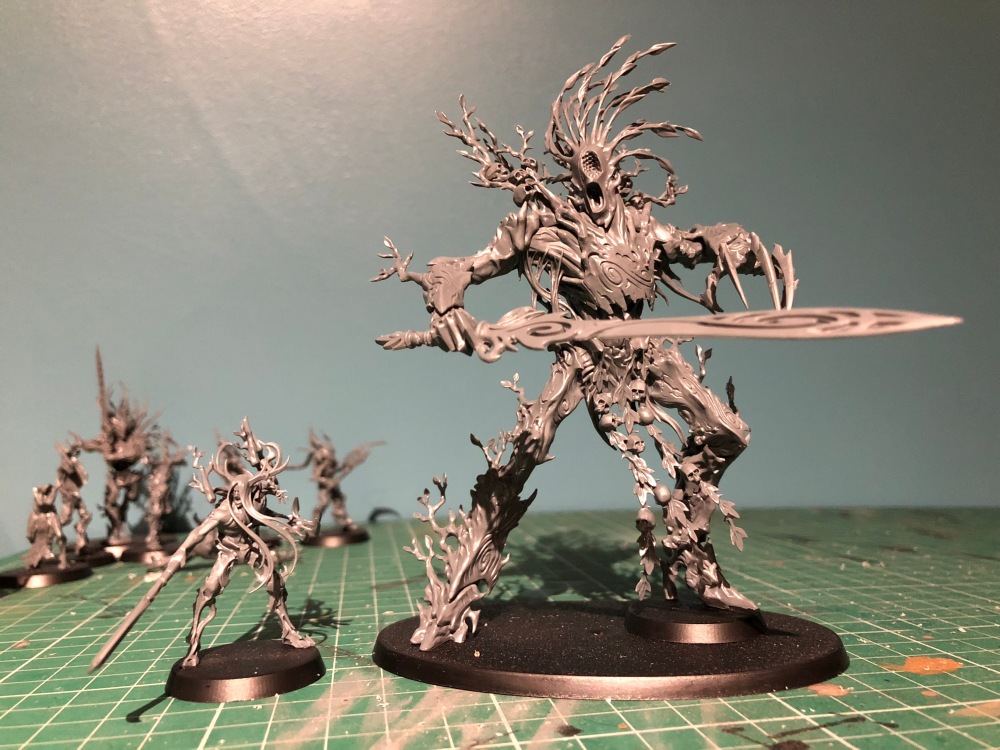 I was originally just going to build a regular Treelord with the skully bits from Durthu, but Durthu’s hair has much more dynamism to it than the regular head, and that sword is so much better looking than the staff that I just went full Durthu in the end. I built the Tree-Revenant champion as instructed as well, just to see how the kit goes together, but for future Revenants I’ll probably go for some head or weapon swaps to mix them up a little.

Got any tips for getting creative with basing or texturing models? I’d love to hear them!