Greetings, fellow humans! This week, I have mostly been building more Brutes and cursing the weather.

Over the weekend I finished building my second Brute unit (the one with Jagged Gore-hackas). They were very kindly donated by Aaron (cheers, dude!), which saved me some time as he’d already assembled the bodies and some of the arms. I’m pretty sure that I’ve managed to use each head and each shoulder pad trophy at least once, so there’s a good variety in the two units. They’re Brutes by name and Brutes by nature going by their rules, so I’m looking forward to using them in battle.

Thanks to the crappy Cumbrian weather again (including blizzards and thundersnow over the weekend!), I’ve not been able to get any of them sprayed. To compensate, I thought I’d get some more models built; especially as I finally managed to pick up my Start Collecting Ironjawz box too (though still no third Myphitic Blight-Hauler). That idea was soon scrapped however, as I used the last of my glue finishing off my Brutes!

As I’ve not been able to get anything painted this week, I thought I’d blog about my painting setup. It might be of interest to some people, but at least it’ll have some pretty colours if not. 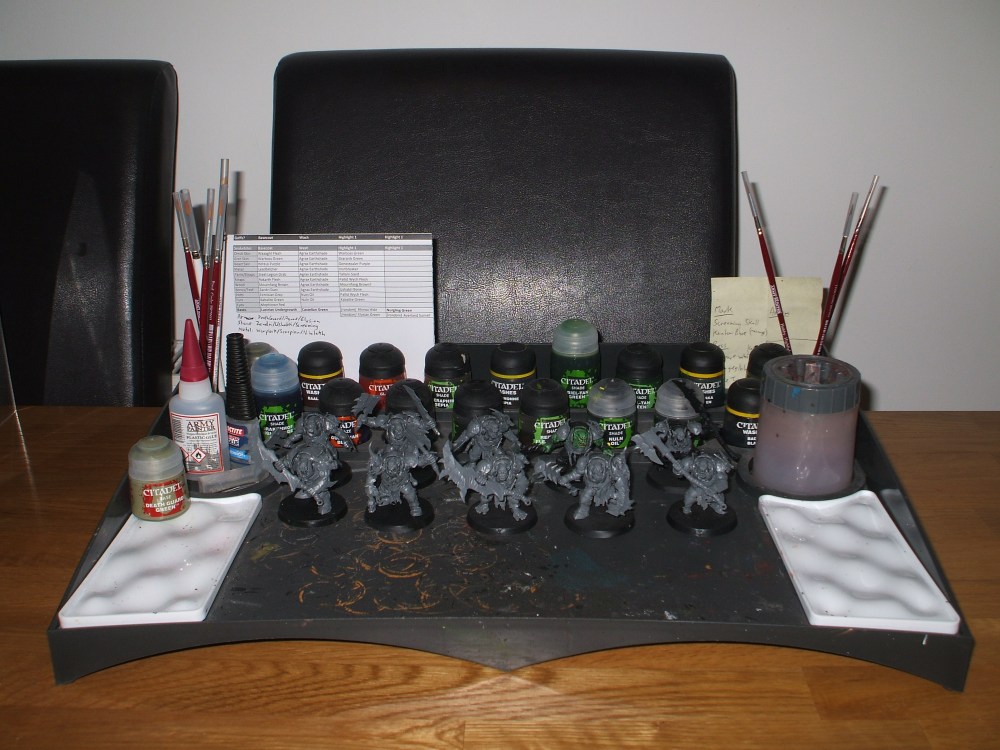 I’ve used a Citadel Paint Station for years, and it’s been a great investment. I used to have the paints that I was using for my current army on it for easy access, and the rest of my paints stuffed in various bags/boxes till I needed them. With me starting some new armies in the past year (my Death Guard and Ironjawz), I was flitting between them a lot more, and swapping my paints about as a result. It meant a bit of faffing around when I wanted to paint something different, and I’d often end up putting paints away ‘in the wrong place’ – or at least somewhere different to where they previously were. I’m normally a ridiculously organised guy, so this just wouldn’t do.

Late last year I spent a weekend with the Dembski-Bowdens, and I saw the future! No, not the future where my Cawdor got scragged by Ross’ Orlocks in our freshly painted Zone Mortalis. Let’s not talk about that. What I mean is, that whilst we were painting the Zone Mortalis tiles, I noticed that Aaron had a little paint rack. It had a few steps, and probably held about 30 paints, and it was such a useful piece of equipment. “Has anyone got the Nuln Oil?”, one of us would ask. “Here it is!”, another would reply after a brief scan of the paint rack. I made a mental note to order one for myself when I got home. 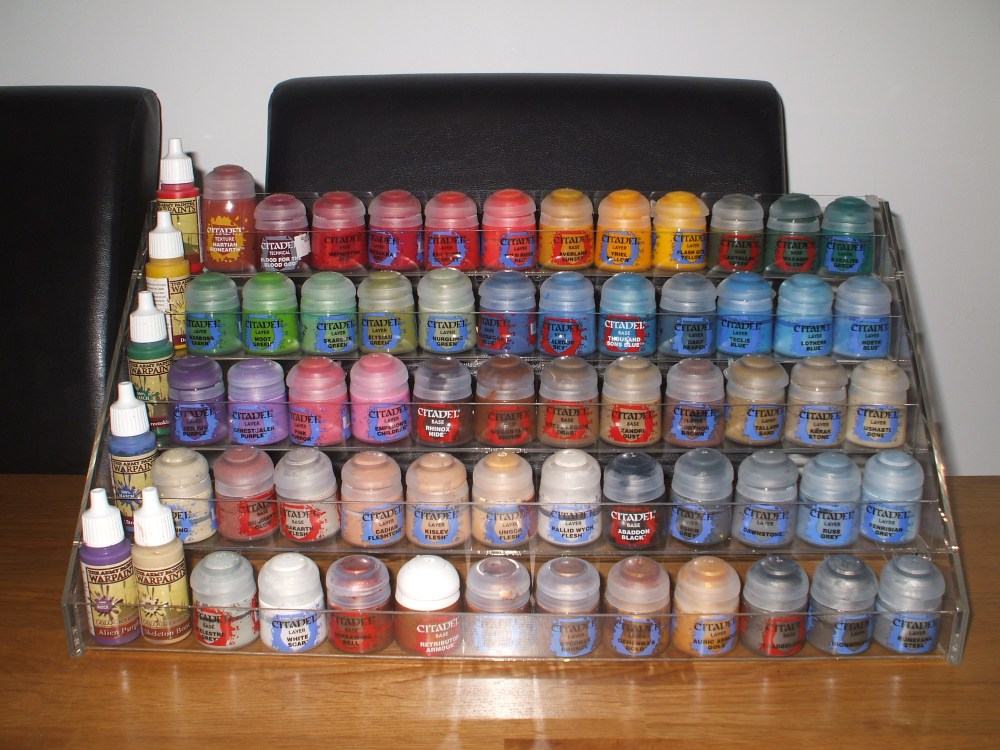 After a quick search online, I found this one. It’s technically for nail varnish, but a read through the comments (I know, you should never read the comments!) showed that several other hobbyists had found a use for it for their paints; so a few clicks later and it was on its way. When it arrived, it was really easy to put together, and I managed to fit 65 paints in it (mostly Citadel, with a few Army Painter ones). I went for a rough ROYGBIV order, followed by browns/flesh tones, then grayscale, and finally metallics. Conveniently, I had enough space in my Paint Station for my washes, so the only paints packed away in bags/boxes now are duplicates and any not from the current range.

It’s made flitting between projects much easier, and it’s great just being able to decide “I fancy painting x today” and getting on with it with the minimum of fuss. Now, if only the weather would improve…

2 thoughts on “All your base (paints) are belong to us.”