Posted on April 9, 2018 by thegrimdocness

I’ve decided not to bore you with yet another WIP post about my Realmgate, guardians, Palladors or Aquilor. Take my word for it, they’re getting there.

But we have a deadline, a planned meet-up to pit our collected Blog-spawned forces against one another in the Aaronorium. That looming date has given me back some momentum to overcome my perpetual hobby inertia.

While I’m working towards that target, and as Ross alluded to in his post, we’ve also considered adding some neutral beasties to our adventures in Ghur…sort of wandering monsters that aren’t under the banner of our existing forces.

Now as soon as we discussed this I thought I had the perfect choice in mind. The gorgeously monstrous Forgeworld Preyton.

This twisted take on a Peryton of myth seemed a natural juxtaposition to my winged and beaked minions, especially with my planned Gryphon-rich force. I wondered if the stats were challenging enough: 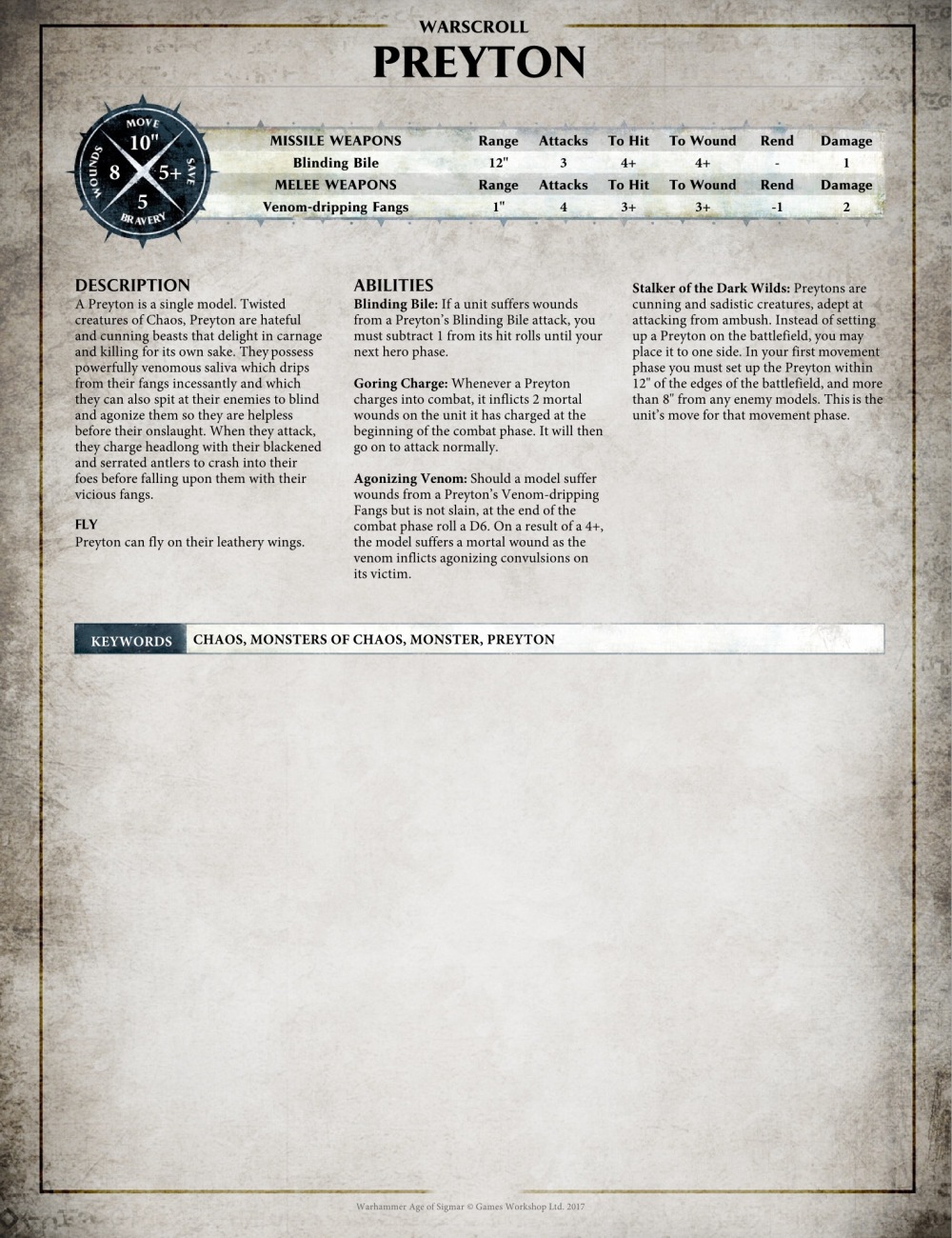 Wow. Perfect. Except for one little hiccup.

Forgeworld no longer sell it.

I couldn’t even seem to find a second hand one.

Disheartened but unbowed I came up with a ‘plan b’. Toying with the Ghur theme and the notion of degenerate human tribes I decided on a counterpoint to my Gryphon-worshipping free peoples force. I imagine Ghur is full of Beastmen, Skaven and various hybrids of man and monster, but one of the most obvious feral beast monsters from modern culture seemed the natural choice.

I’m planning on a large pack of skin wolves, interspersed with Dire Wolf conversions based on the 40k Thunderwolf miniatures. This should provide a nice ‘mob’ of beasties with no allegiance to anyone but themselves…perfect for an unexpected plot twist in any Ghur-set battle.

The pack will be themed around a unified paintscheme, and I’m vacillating between something natural, or a more ‘Dark AoS’ concept, like some ‘shade wolves’ or elemental appearance. If anyone has any useful links, pics or thoughts to offer on which direction to take them I’d love to see them in the comments below! I’m also planning a conversion for the skin wolves using a thunderwolf head and tail on this often forgotten gem of a mini:

Time (and sanity) permitting I may even knock up a small group of converted blood reavers with a wolf vibe to round off the concept as another ‘random encounter’ mob.

Until next time, hobby well!