I’ve spent this week preparing for our upcoming Skirmish weekend, getting some last bits of terrain put together and getting the scenarios sorted. And when I say getting the scenarios sorted, I mean copying the rules from the book verbatim and just changing the names and flavour text. So here’s how they’re looking, suitably vague to allow us to tweak the narrative to suit whoever wins and loses, or just whenever it feels cool.

On account of Col having to fly over to Northern Ireland to meet up with the rest of us, we’re planning to play through all six scenarios in one day, and then blog the results from our warbands’ respective perspectives.

We’ll be playing 2v2, with Aaron and Col’s Orruks and Grots on one side, and me and Mark’s forces of Order on the other. We’ll be starting at 35 Renown between us, and working up to around about 50, based on what we have done for our various warbands. Col has extra Orruks, and I’ve got a bunch of Sylvaneth done, so we’ll have plenty of room for extra forces if we need them.

Here’s how my final stage 50 Renown Skirmish warband is looking:

Amadriel, Lady of the Grimwald – 16

Kirannon, Warden of the Northern Marches – 15

Kraia, Handmaiden of the Lady – 2

On the terrain front, despite a ludicrously busy calendar for what seems like the millionth week in a row, I managed to get some trees painted up using my super secret fast painting method*. Our setting is a lost city in the midst of one of the great forests of Ghur, and you can’t have very well have a forest without trees. Plus it should help my Sylvaneth feel right at home as well. They’ll become part of our collective, uh, collection of generic terrain in the Aaronorium, but I’ll be able to use them as Sylvaneth Wildwoods when we get around to some bigger games. I’ve got about 1000 points of Sylvaneth painted now, so I’d like to do some proper sized battle reports in the future.

My spray stick has never been more dangerous 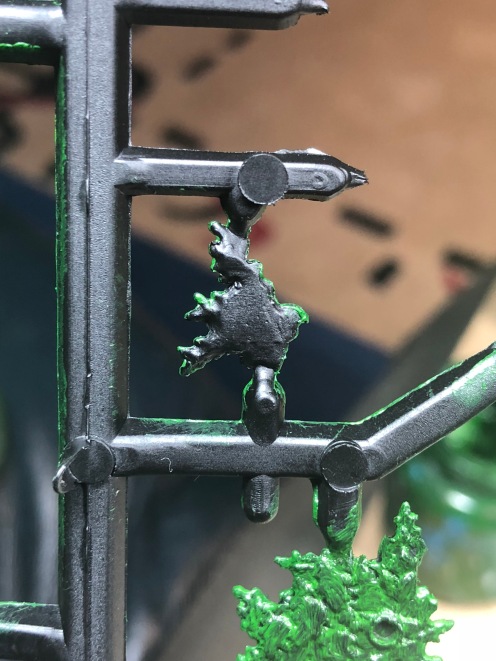 This leafy Great Britain can’t be a coincidence

These trees are super delicate though. The leaves have very small connection points and the holes aren’t even centred, so they’re just asking to be broken off. One of the GW staffers recommended that I magnetise all the leaves. I was like, “pfff, what a waste of time.” I’m not so confident with my scoffing now, having broken off one or two sets of leaves just putting them into the box. I’m somewhat dubious about them surviving even the 5-minute car journey to Aaron’s. Bonus though, they seem to come with more leaves than you need, or at least than I want to fit on, so we’ll be able to decorate the ruins with the spares to make them look suitably overgrown.

I’ve also got into Shadespire in a big way in the past few weeks, so I might talk about that next week. At length. Whether you want me to or not.

* The secret is to use a giant brush and make a huge mess. Hoo boy, do they look like garbage close up.