Game 4 sees the forces of Order struggling to contain the roiling energies of an unstable realmgate, all the while holding off the tenacious Orruks intent on claiming their precious cargo for themselves.

Warbands (no reinforcements this game) 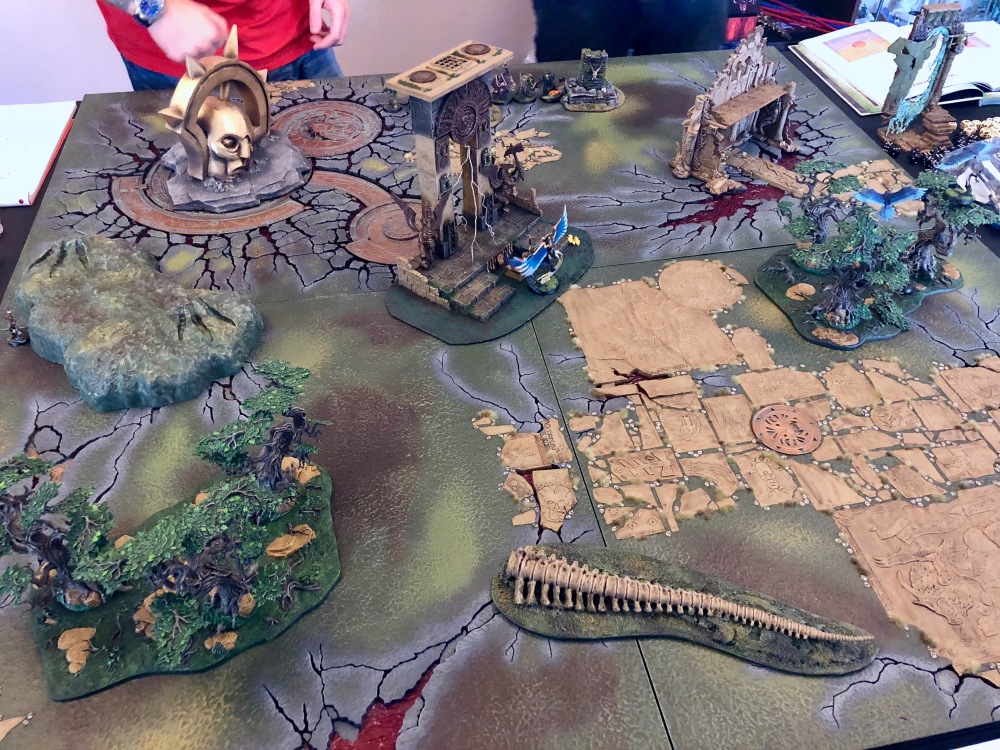 The party had been travelling for almost a full day now. Their best plan was still to try and reach the realmgate the Knight had mentioned and send the artefact to Azyr for safekeeping. After the Orruks had retreated, temporarily no doubt, Arthos and Amadriel had found the Venator lying in a crater the shape of a giant foot, the ground still crackling with magical fallout. She wasn’t quite dead, and aided by Amadriel’s life magic, amplified by the realmstone amulet, she recovered quickly. Their travel had been slow however, and from time to time they could hear the Orruks ahead of them, moving in roughly the same direction.

Something was wrong with the realmgate. Artemisia had said they should expect two guardians at the gate, but instead they found the gate shut, a halo of etheric lightning sparking from the great seal above the portal . Such arcane technology was far beyond Arthos’ ken, but he could see that the ruins of some vast statue had fallen on a set of giant wheels half-buried in the ground behind the realmgate. Perhaps that gave some clue as to why the gate lay closed .

“The defences of the gate will not harm me. If you can buy me enough time, I may be able to summon the gatekeepers,” Artemesia shouted over the crack of lightning as a bird flew too close to the gate and was incinerated. The Orruks were by no doubt close by, their loon-shaman inextricably drawn to the shard of realmstone.

As the dryads withdrew into a nearby copse, Arthos made his way around a small hill near the gate, hoping to find a good place to ambush the Orruks should they be foolhardy enough to approach the gate. Of course they would.

The Orruks come crashing out of the nearby ruins, hooting and hollering, apparently no worse for wear from the last encounter save for a few new scars and some injured pride that they no doubt intended to make reparations for. Their speed catches Arthos off guard, and they are almost on the realmgate before he even has a chance to move. He quickly runs around the back of the hill and makes for the giant head, wanting to close with the Orruks but not too keen to come within range of the eldritch energy cascading off the gate.

On the far side of the gate Arthos sees the tree-kin emerge from the tree line, apparently also caught off guard by the Orruk’s haste. The coppery taste in Arthos’ mouth alerts him to the build up of magic as the Orruk shaman thrusts his staff into the air and a smoking green fist shoots out of the end and whistles through the air to smash the Knight in the chest. She stumbles and unleashes a quick volley of arrows before hastily returning to the tome in front of her. In response, the Lady of the Grimwald summons a swarm of vicious spites that engulf the advancing Orruks. Arthos sees one howl in pain and recognises it as the Orruk whose head he buried his axe in not one full day before. What did he need to do to kill these things?

As the Orruks reach the portal the magical defences flare. Lightning coils out from the gate and grounds itself, leaving several glowing spots in the earth. As Arthos watches the same brute, one bolt lances towards the Orruk and catches the tip of his huge cleaver. The Orruk spasms under the vast energy racing through him on its way to the ground, and with a wheeze topples backwards, smoke drifting from his ears.

Too many Orruks are still standing though, and Arthos sees them pile into the Knight who breaks from her ritual to face the beasts. He sees one Orruk in a purple cloak skulking around the back of the gate and races forward, hoping to catch it by surprise. He readies his swing, but has to dodge at the last moment as a streak of lightning forks into the giant metal gear he and the Orruk are standing on. The creature turns in surprise, and then grins at finding an opponent so close at hand. Arthos ducks as the Orruk swings a massive gouged axe at his head. The beast is strong, but its size works against it as Arthos is able to dodge and weave away from the violent swings. Any one of the strikes would smash him to a pulp so he doesn’t even attempt to parry, but waits for his moment to strike. An axe whistles over his head and he slices his own down into the unarmored bicep. The Orruk roars in pain as the axe drops from the useless arm and swings its second axe in an uncontrolled overhead chop. The heavy axe thuds deep into the metal and sticks. With the Orruk caught off balance, Arthos sees his moment and brings his axe around as hard as he can, catching the greenskin just below the ear. Blood and teef fly, and the Orruk goes down. 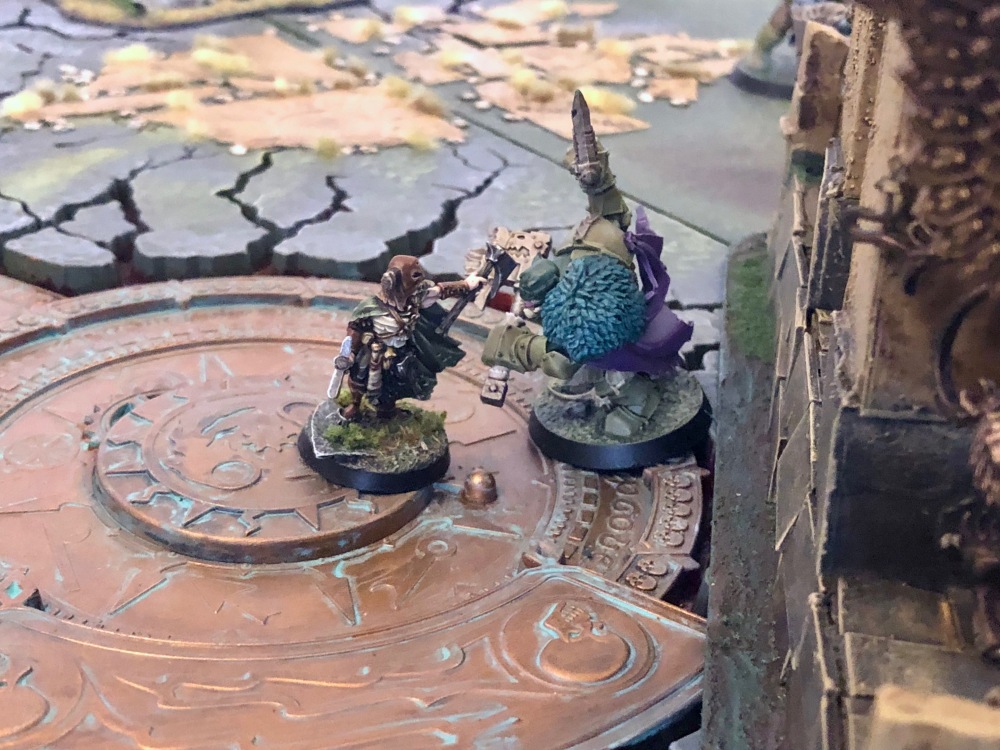 Catching his breath, Arthos looks over the steps of the realmgate to see a frenetic melee has broken out. The Orruk Shaman is whirling his staff around his head with both hands, howling incoherent syllables, while the Artemisia and Amadriel try to dodge under the improvised club to land a solid blow. An Orruk brute in dark green plate flails his cleaver at the two aether hawks clawing at him. He lunges forward and grabs one by the wing, dashing it on the stone steps before stuffing it into his mouth. He manages one good chew before the bird discorporates in a blast of azure light and blue feathers. Growling in frustration, he hurls his double-headed axe at the second bird. It shears straight through the startled raptor, and disappears into the trees.

Now axeless, the brute grunts in frustration and, ignoring the whirling combat behind him, slogs off into the forest to retrieve his weapon. Arthos watches a smaller Orruk edging up on the fight from behind pause for a moment, its tiny eyes squinting at the back of the heavily outnumbered Shaman. Arthos assumes the Orruk is calculating its odds as its lips move silently, before the wily creature turns slowly and lopes off into the treeline. The Orruk shaman, now alone, eventually falls under the rain of blows from the Knight and the Branchwych.

This was one of the closer games of the weekend from what I remember. The D3 mortal wounds dished out by the vortex made it a huge risk for the Orruks to charge into, but they had no choice with their lack of ranged weapons. Similarly, with so few wounds amongst the Order models, it was very risky to charge in to help. Unfortunately for the Orruks, their Bravery failed them at a crucial moment, and two powerful fighters fled when they could have done a lot of damage. At this stage in the campaign the forces of Order were racking up a good amount of Glory, and we were able to bring out the big guns for the next game!

And be sure to check out Col’s report of game 4 and 5 here!