Greetings, fellow humans! This week, I have mostly been catching up on reading. In particular, White Dwarf and the Age of Sigmar rulebook – as I’ve not read it since it came out! Orktober’s over now (sadly), but only just; so I’ll post a battle report that my retro Goff Kill Team took part in at the Aaronorium. I got a mugshot of the whole team while I was there, including a trio of objective markers that I made the go with them.

The game that we played was Covert War, which involved placing an objectives each, but then removing one before the game started. My objective turned out to be the dud, so my Orks would have to take the fight to my friend Greg’s Genestealer Cultists.

My Kill Team consisted of the following: 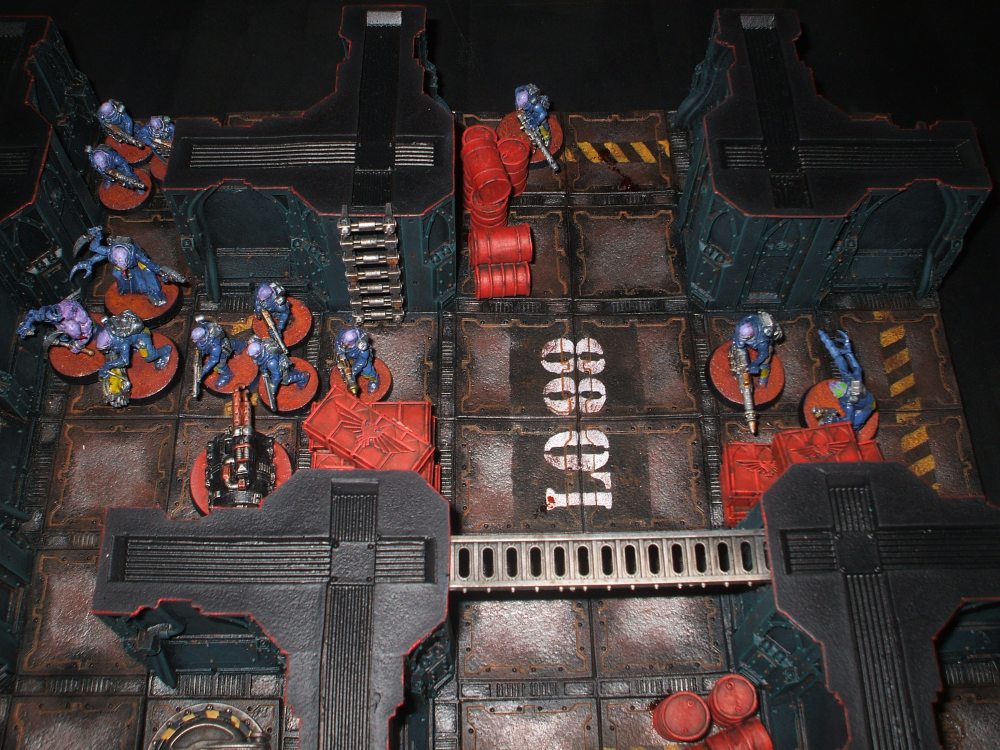 The Orks won the initiative in round 1. All of the Orks moved, as did most of the Cultists. The Heavy Stubber readied itself, and proceeded to take the Beakie Tinboy out of action. The Panzee Tinboy retaliated by taking the Flamer Neophyte out of action, whilst shrugging off several shotgun blasts directed at it. One of the Rockers targeted the Aberrant, but their armour saved them. The Mining Laser missed the Stunty Tinboy (probably because it was such a small target), and in true Ork fashion the rest of the Orks missed too.

The Cultists won the initiative in round 2, for the first and last time in the game. The Heavy Stubber, Mining Laser and 3 Autoguns readied themselves, and the Aberrant charged the Stunty (whose overwatch hit, but failed to wound). The rest of the Cultists moved, as did the Orks. The Warboss attempted to counter-charge the Aberrant, but failed miserably. In a role reversal, the readied Mining Laser took the Panzee out of action, whereas the readied Heavy Stubber missed the Stunty. The Demo Metamorph chucked a Blasting Charge at the group of Rockers and Makari, but failed to wound any of them. The Mining Laser got burnt by one Rocker and passed its armour save, while three Neophytes got burnt by another Rocker – taking two out of action! The Shotguns proved their worth in the confined spaces by taking a Rocker out of action and (flesh) wounding Makari. He’s a lucky Grot! In close combat, the Aberrant caused three flesh wounds to the Stunty, who somehow managed to cause one in return! Despite their injuries, Makari and the Stunty both passed their Nerve tests. 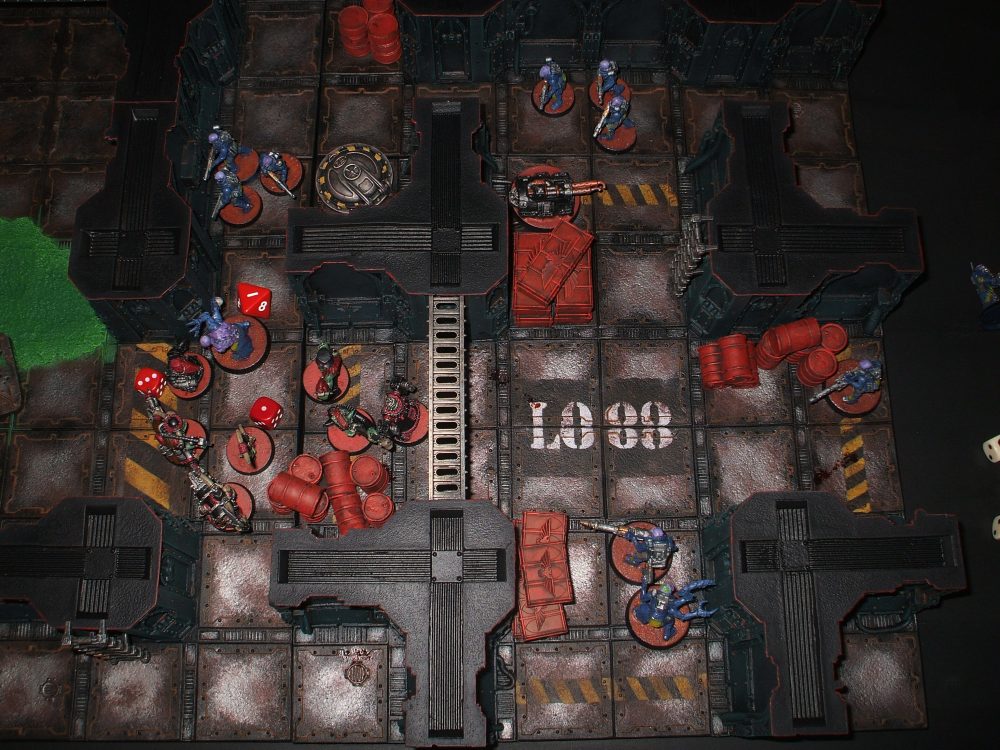 Round 3 started with the Runtbot getting ready. The Rockers and Makari moved, and Ghazghkull and the Warboss charged the Aberrant. The Heavy Stubber and Mining Laser readied once again, and the Shotguns moved back to the objective. The readied Runtbot hit the Mining Laser, but infuriatingly rolled a one to wound! The readied Cultists did much better, with the Mining Laser (flesh) wounding one Rocker and the Heavy Stubber taking the other out of action. The surviving Rocker scorched three Autoguns, but only took one of them out of action – taking two flesh wounds in return. Ghazghkull and the Warboss both missed the Aberrant with their Sluggas ( despite their point blank range), but they did cause a flesh wound each with their Choppas. The Orks failed their Break test though, resulting in the Warboss, Makari and the Rocker becoming shaken.

The Orks won the initiative again in round 4, but with most of their force being out of action or shaken, there wasn’t a great deal to do. The Runtbot, Heavy Stubber and Mining Laser readied once again, and the Comms Metamorph charged the Rocker. The readied Runtbot wounded the Heavy Stubber, but they passed their save! In an act of karma though, the readied Mining Laser only (flesh) wounded Makari. He’s a lucky Grot! All of the engaged models missed with their pistols, but Ghazghkull took the Aberrant out of action and the Comms Metamorph (flesh) wounded the Rocker. At the end of the round, Makari and the Runtbot became shaken, but the Warboss and Rocker passed their Nerve tests.

The Orks had the initiative in the final round, but things were looking bleak for them. Ghazghkull and the Warboss successfully charged the Autoguns holding the objective, but the Stunty charged the Mining Laser and was cut down by overwatch – suffering two flesh wounds, which brought him up to five in total (and consequently took him out of action). Other than the Heavy Stubber taking the Runtbot out of action, the actual shooting phase was highly uneventful. Ghazghkull only managed to cause a single flesh wound to the Neophyte that he was attacking, but it was more than his fellow Warboss – who missed completely. The Rocker failed to wound the Metamorph, who inflicted a fourth flesh wound on the Rocker (taking him out of action). All of the attacked directed at Ghazghkull and the Warboss failed to wound, but due to their heavy losses all of the surviving Orks became shaken, leaving Greg’s Cultists in control of the objective for the win.

It was another fun, close game, but I think that the confines of Zone Mortalis made things a bit more difficult for us. Especially as we ignored nearly half of the board because it was blocked off from the objective! I was quite pleased with how my Kill Team performed though. The Rockers (Burna Boyz) were pretty scary, and having a trio of Tinboyz (Spanners) meant lots of long ranged shots for an improved chance of hitting something. The Runtbot (Loota) performed fairly poorly, but I think that was more down to the (bad) luck of the dice.

I’m most likely going to get a few more old school metal models to add to my Kill Team in the future. I’ll probably get some Oddboyz and count them as specialist Boyz…

One thought on “Kill ’em all.”