Greetings, fellow humans! This week, I have mostly been typing up notes from our recent gaming weekend.

Unfortunately, Mark had trouble with his Doomwheel and couldn’t make it, so only three of the four Warlords gathered at the Aaronorium. Ross and I had our biggest Age of Sigmar game yet (1k), and we also squeezed in some Skirmish games with Aaron too.

To keep things simple for our big game, Ross and I played the First Blood battleplan from the Age of Sigmar Core Book. The order of the day would be to kill ’em all!

The battle started with Barooga the Shaman conjuring a Squignado into being, and sending it spinning wildly towards the undead leaders in the middle of the battlefield. He stayed back in the relative safety of some woods with his bodyguard of Shootas, while the rest of the Gloomspite Gitz bounced and twirled forwards randomly – as Squigs and Fanatics tend to do. The Squig Hoppers worked up a decent enough bounce to bring them into charge range (12″), but it was still a bit too far for them as they failed their charge.

The Guardian of Souls failed to stop the Squignado heading its way, but did manage to cast Shademist on the nearby Chainrasp Horde (making them harder to wound). The Briar Queen attempted to retaliate with an endless spell of her own, but failed to cast Ravenak’s Gnashing Jaws. The Nighthaunt army advanced towards the purple tide they faced, and made some very successful charges. The Grimghast Reapers charged the Fanatics with a roll 10″, granted them an immediate attack (thanks to the Nighthaunt’s Wave of Terror ability) resulting in the death of all of the Fanatics! There was a similar massacre on the other side of the battlefield as the Knight of Shrouds used its Lord of Gheists Command Ability to give the Glaivewraith Stalkers an extra attack, enabling them to wipe out the Squig Hoppers too! Things were not looking good for the Gitz. 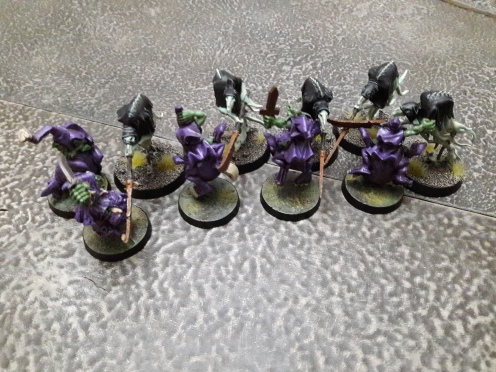 As if on cue, a celestial reinforcement arrived in the form of the Bad Moon rising behind the Moonclan hordes. The Squignado swept into the Guardian of Souls and wounded it as it once again failed to dispel it. It remained composed enough to cast Shademist on the Chainrasps however. The Briar Queen successfully summoned Ravenak’s Gnashing Jaws this turn, which killed one Squig and wounded another. Both the Glaivewraiths and the Chainrasps charged the Boingrot Bounderz; the latter taking them by surprise as they materialised through the large column of rock between them. The Knight of Shrouds failed to join in, but used his Lord of Gheists Command Ability on the Chainrasps. Boosted as they were, they only managed to kill a pair of Bounderz, whereas the Squigs avenged the Fanatics by killing all of the Grimghast Reapers. The Glaivewraiths wounded another Bounder but failed to cause any damage to the Shootas (who also failed to do any damage). Suitably spooked, the Bounderz only managed to kill one Chainrasp and one Glaivewraith, with Sesta and Wurr heroically piling in and accounting for a second Chainrasp. One Bounder thought better of things and fled, while the Spirit Torment healed the Guardian of Souls with Captured Soul Energy.

With the Bad Moon now on their side (killing a Chainrasp with its light), the Gitz fought back. Barooga successfully cast Mork’s Mighty Mushroom, but it was dispelled by the Nighthaunt. The Shootas managed to bring down a Glaivewraith with their arrows while the Squigs charged the Knight of Shrouds causing an impressive four wounds. The Chainrasps and Glaivewraiths both failed to kill any Bounderz this turn, losing seven Chainrasps (including three to Sesta and Wurr) and a Glaivewraith in return. The wounded Knight of Shrouds killed a Squig and caused two more to flee, but one of them caused a further wound in its violent escape! The Spirit Torment healed the Knight though, restoring two wounds. Three Chainrasps also fled, reducing the unit’s size further.

Ravenak’s Gnashing Jaws floated through the Nighthaunt leaders, causing five wounds between the Lord Executioner, Spirit Torment and Briar Queen. The Squignado on the other hand swept up an unfortunate Squig caught in its path, only adding to the insanity. Barooga managed to dispel the Guardian of Souls’ attempt to cast Spectral Lure, but the Guardian reciprocated by dispelling the Squignado. The Briar Queen failed to cast Arcane Bolt at the Squigs, and then advanced with her Thorns and the rest of the Nighthaunt leaders. Her Rending Scream also failed to injure the Squigs. Not to be bested by the diminutive death-balls, the Thorns, Lord Executioner and Spirit Torment all charged into the Squigs to support the Knight of Shrouds. He needed little help however, taking down five of them by himself! The remaining Squigs failed to do anything before they were cut down by the Thorns and Lord Executioner. The Chainrasps killed another Bounder but lost three in return, as the Glaivewraiths picked on the weaker Shootas (killing one and forcing another to flee). The Knight of Shrouds healed once again, but Sesta used his Inspiring Presence Command Ability to keep the Bounderz in the fight.

The Bad Moon turned its gaze to the Glaivewraiths, but they withstood its stare as Barooga sent the Squignado flying towards the Guardian of Souls (causing three wounds). The Shootas were fairly accurate this turn, killing two Glaivewraiths and leaving just one alive (you know what I mean!). Sesta and Wurr charged alongside the Squignado into the Guardian of Souls, causing a further two wouds (leaving it with a single wound remaining). The Chainrasps swung ineffectively at the Bounderz and lost two of their own, but the sole surviving Glaivewraith killed a Bounder before it was brought low by the Shootas’ Slittas. The Guardian of Souls was furious at being so close to death (well, its equivalent), and poured all of its anger into attacking the Loonboss – causing three wounds! [Ross rolled three sixes both to hit and to wound, which I promptly followed up with two ones and a two for my saves!] The Spirit Torment healed the Briar Queen with Captured Soul Energy (recovering three wounds), while another Shoota fled and Sesta once again used Inspiring Presence to ensure that the Bounderz were going nowhere.

The Bad Moon rose even higher in the night sky of Ghur, shining its sickly light on the entire battlefield. Ravenak’s Gnashing Jaws continued their path of destruction through the Nighthaunt elite, this time causing another five wounds between the Briar Queen and her Thorns, the Knight of Shrouds and the Lord Executioner. The Squignado reversed its spin however, slamming back into the Loonboss and causing three wounds. Despite being badly wounded, the Guardian of Souls cast Spectral Lure to return three Chainrasps and struck the Loonboss with an Arcane Bolt. This left him with just one wound, which the Briar Queen proceeded to strip with an Arcane Bolt of her own! With the enemy general dead, the unengaged Nighthaunt advanced. The Briar Queen killed two Shootas at range with her Rending Scream before charging in with the Knight of Shrouds – killing another three between them. The Lord Executioner tried to join them, but was too far away. The Bounderz and Chainrasps continued their war of attrition, killing one enemy each. Acting General Barooga used his Inspiring Presence on the Shootas, but this meant that a pair of Bounderz fled the field.

The Guardian of Souls’ time had finally come, as the Bad Moon got revenge for the fallen Loonboss. Barooga finally cast Mork’s Mighty Mushroom, flinging it towards the middle of the battlefield where it could cause the most damage: wounding the Spirit Torment and killing two Thorns and a Chainrasp. In a probably never to be repeated display of Gobbo competence, the Shootas wounded the Knight of Shrouds with their arrows before finishing him off with their Slittas! They ain’t afraid of no ghost! The Briar Queen killed three of them as they celebrated, but Barooga once again used his Inspiring Presence to keep them on the battlefield.

Mork’s Mighty Mushroom continued to make an impact, wounding the Spirit Torment again and killing a pair of Thorns and Chainrasps. Ravenak’s Gnashing Jaws once again chased down the Nighthaunt leaders, this time wounding the Spirit Torment and Lord Executioner twice each as the Squignado headed towards the Grots. The Briar Queen unleashed a Howling Vortex, wounding Barooga and killing a Shoota. She then focussed back on the Shootas, killing a pair of them with her Rending Scream and Briar Whip. The Thorns failed their charge, but the Spirit Torment passed after being urged Forward to Victory with the Command Ability. The Spirit Torment and Shootas fought to a stalemate, but the Lord Executioner charged in and killed four Shootas. Barooga was becoming quite accustomed to reminding the Shootas not to leg it.

In the final turn of the game Barooga cast Arcane Bolt at the Spirit Torment, but it was saved by its Deathless Spirits rule. The Shootas fell back in an attempt to preserve life, but it was too little too late. After tallying up the wounds caused it was a major victory to the Nighthaunt – 85 to 45!

I had lots of fun playing this game, but things could have been a lot different had I been able to get the charge with my Fanatics, Hoppers and/or Bounderz. I learnt that Endless Spells are pretty chaotic too. Ross won a lot of battle round roll-offs and chose to go first – meaning that I’d get to move the first Endless Spell. I didn’t realise at first that just because you cast it doesn’t mean that it stays under your control!

With next week’s battle report being for a Skirmish game, it won’t be quite as wordy as this one…