Greetings, fellow humans! This week, I have mostly been typing up another Skirmish battle report from our recent gaming weekend.

After a few ‘warm-up’ games, we decided to dive in at the deep end, and opted for a three-way Skirmish game. We played a matched play game with warbands of 160 renown each, as per the newest rules in January’s White Dwarf. We chose the Treasure Hunt battleplan, as it seemed well suited to support more than two players.

For this game we had five objectives represented by the columns from the Arcane Ruins kit. We put the smaller, ruined columns in between them for aesthetic reasons, and to give the impression of a stone circle. The Idoneth went first, with the Tidecaster placing a Mystic Shield on one Reaver as they all advanced towards the ruins. The Gloomspite Gitz and Nighthaunt also advanced, keen to find the treasure before their opponents.

The Tidecaster started the second round as she had the first, but this time failed to produce a Mystic Shield. [Aaron rolled snake eyes – lucky it wasn’t 40k!] The Idoneth continued their advance however, and the Reavers shot and killed a Squig Hopper between them, which in turn caused a Shoota to flee. The remaining Gitz advanced into the stone circle, but unearthed no treasure despite searching two different ruins. The undead floated towards the nearest ruin, but they too failed to discover anything useful. One of the Chainrasps split off and charged the surviving Hopper, but was cut down.

The Tidecaster was back on form this round, casting Mystic Shield on one Reaver as the others searched two ruins and discovered the first treasure of the game in one of them. Sensing an enemy presence nearby, they let loose a volley at the Loonboss and Hopper in the nearby woods. They Squig riders emerged unscathed though, thanks to the cover provided by the abundance of branches. The Nighthaunt found the second and third pieces of treasure before charging into the remaining Gobbos en masse. The Lord Executioner failed to lead by example, despite urging itself Forward to Victory. [Ross rolled re-rolled his 5 into a 4…] Eight of the Chainrasps made it though, dragging down the Hopper and wounding the Loonboss but losing only one in return. In the following turn, the Loonboss defeated another Chainrasp, but everybody else failed to do any damage. 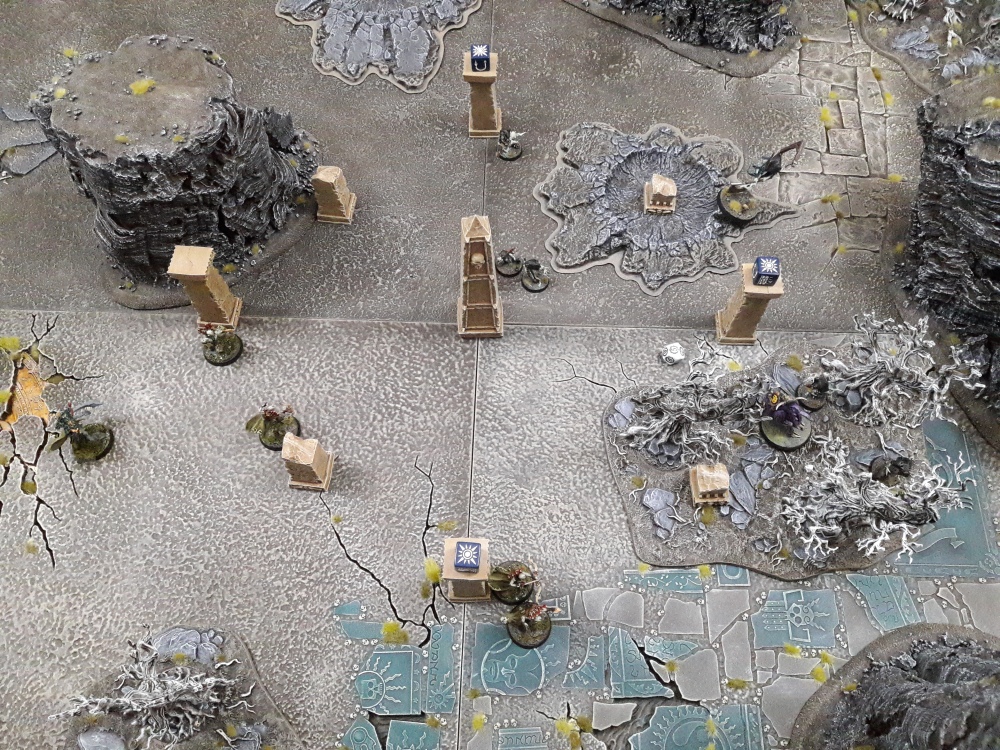 Having thinned out the their numbers last round, several Chainrasps left the engaged ghosts to finish off the last of the Gloomspite and wandered over towards the Namarti-held objectives. On their way, they also discovered the treasure under central column, claiming it as their own. The Lord Executioner more than made up for its previously failed charge by smashing into the Loonboss and unceremoniously taking a little off the top. [Ross rolled two 5’s to wound, becoming two 6’s and adding two damage to each attack for a total of six wounds!] A Chainrasp ended the life of the remaining Shoota too, leaving no Gitz on the battlefield. With the green-skinned distraction over, the Tidecaster launched an Arcane Bolt at the nearest Chainrasp. She then took a Reaver with her to find the last piece of treasure. With the object secured, the Namarti opened fire at the Chainrasps but only managed to fell one of the ethereal beings. The Tidecaster and a pair of Reavers charged in to finish the job; the Tidecaster adding to the tally but losing a Reaver in the process.

With all of the treasure now found, the Nighthaunt descended upon the Idoneth. The Lord Executioner badly wounded the Tidecaster with its Decapitating Greataxe as a Chainrasp killed the Reaver attempting to defend her. Three Chainrasps charged the Reavers holding the other objective, with each side killing one model. The wounded Tidecaster conjured a huge Arcane Bolt at the Lord Exectioner, causing three Mortal Wounds. [Aaron rolled two sixes this time – once again lucky that it wasn’t 40k!] She then fled towards the central pillar whilst the last remaining Reaver fought a pair a Chainrasps to a stalemate. 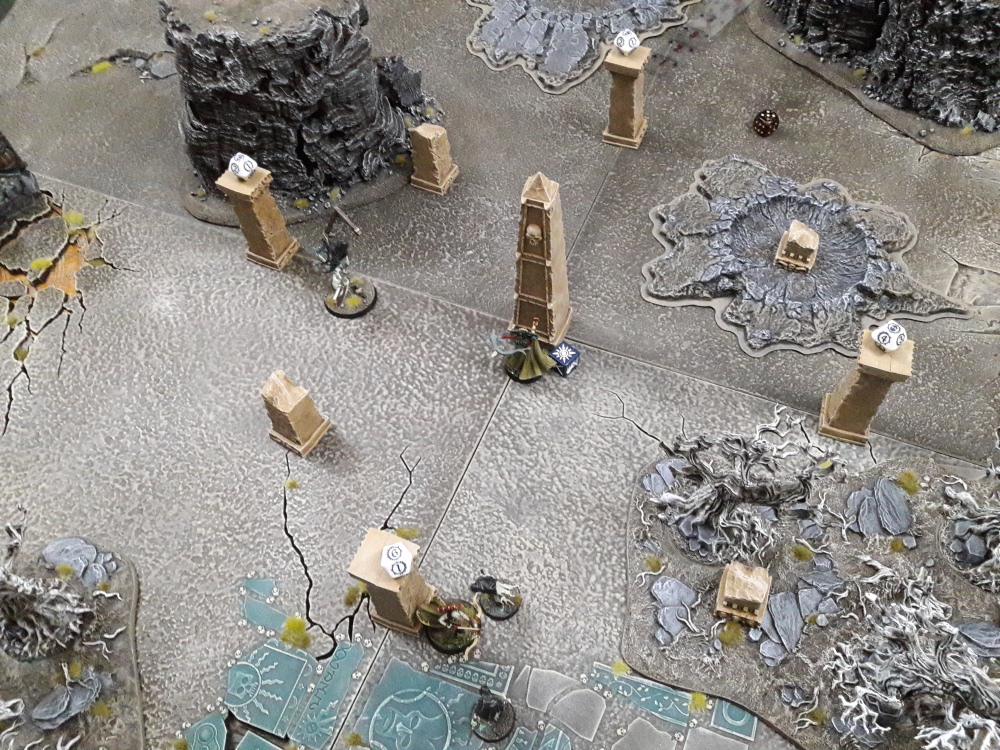 Both sides had suffered heavy losses, but victory went to the Nighthaunt – 3 to 2!

I’ve taken part in plenty of Apocalypse battles over the years, and played a few doubles games too; but I think that’s the first multi-player game (as in, more than two sides) that I’ve ever played. It was a lot of fun, even though I got killed off before the end of the game! I think I was set to fail from the outset though, as Sesta (my Loonboss) is rather points-heavy for a Skirmish battle. I should have taken Barooga (my Shaman) instead, and used my spare points to add in some Squigs. With two wounds and two attacks each, they’d have probably been decent little damage dealers. You live and learn though (or not, in this case)…