Greetings, fellow humans! This week, I have mostly been typing up a Skirmish battle report from our recent gaming weekend.

Ross and I played a matched play game with warbands of 250 renown each, as per the newest rules in January’s White Dwarf. Ross rolled a d8 to randomly determine which of the seven battleplans that we’d be playing, and rolled an 8. A quick re-roll produced another 8. Third time lucky, and he rolled the second battleplan – Dangerous Hunt.

We’d need an Endless Spell to hunt down (and take control of) for that, so the Squignado was the only sensible option (or perhaps not). Basically, the person closest to the spell would gain control of it for the round, but go second. The winner would be the person who caused the most damage (in terms of renown) with the spell. 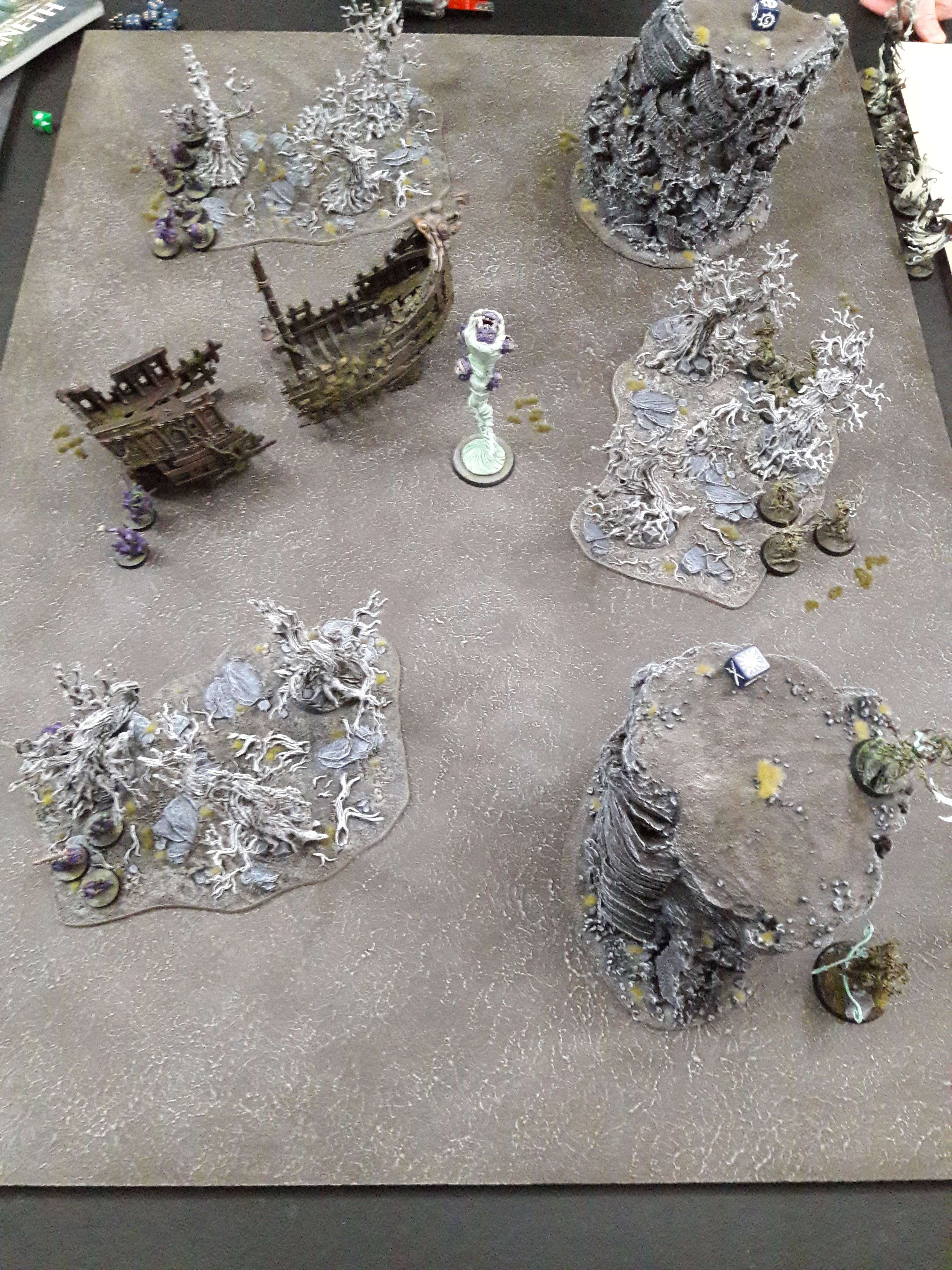 The forces of Order took priority in the first battle round. Amadriel protected herself with a Mystic Shield as the Sylvaneth advanced towards the Squignado. The Kurnoth Hunter took aim at the two central Squig Hoppers, felling one of them with its Kurnoth Greatbow. The forces of Destruction headed towards the Squignado too, eager to attempt to control the terrifying tornado of teef. Two of the Shootas loosed their arrows at the nearest Dryads, killing one but missing the other thanks to the Blessings of the Forest. The other three Shootas fired at the Kurnoth Hunter, but failed to cause any damage. Three of the Squigs and two Squig Hoppers charged into the Dryads (but one of the Squigs didn’t make it), another Hopper charged into Amadriel and the other two Squigs couldn’t quite reach the Kurnoth Hunter. The Hopper that bounced into Amadriel caused two wounds, but her Quick-tempered nature meant that she cut down her attacker with ease. One of the Squigs was almost killed by a Dryad, but a few of the Squigs missed them due to the Blessings of the Forest [which I officially hate!]. Thankfully, the Gloomspite Gitz passed the Battleshock test thanks to Barooga’s Inspirational Command Trait. 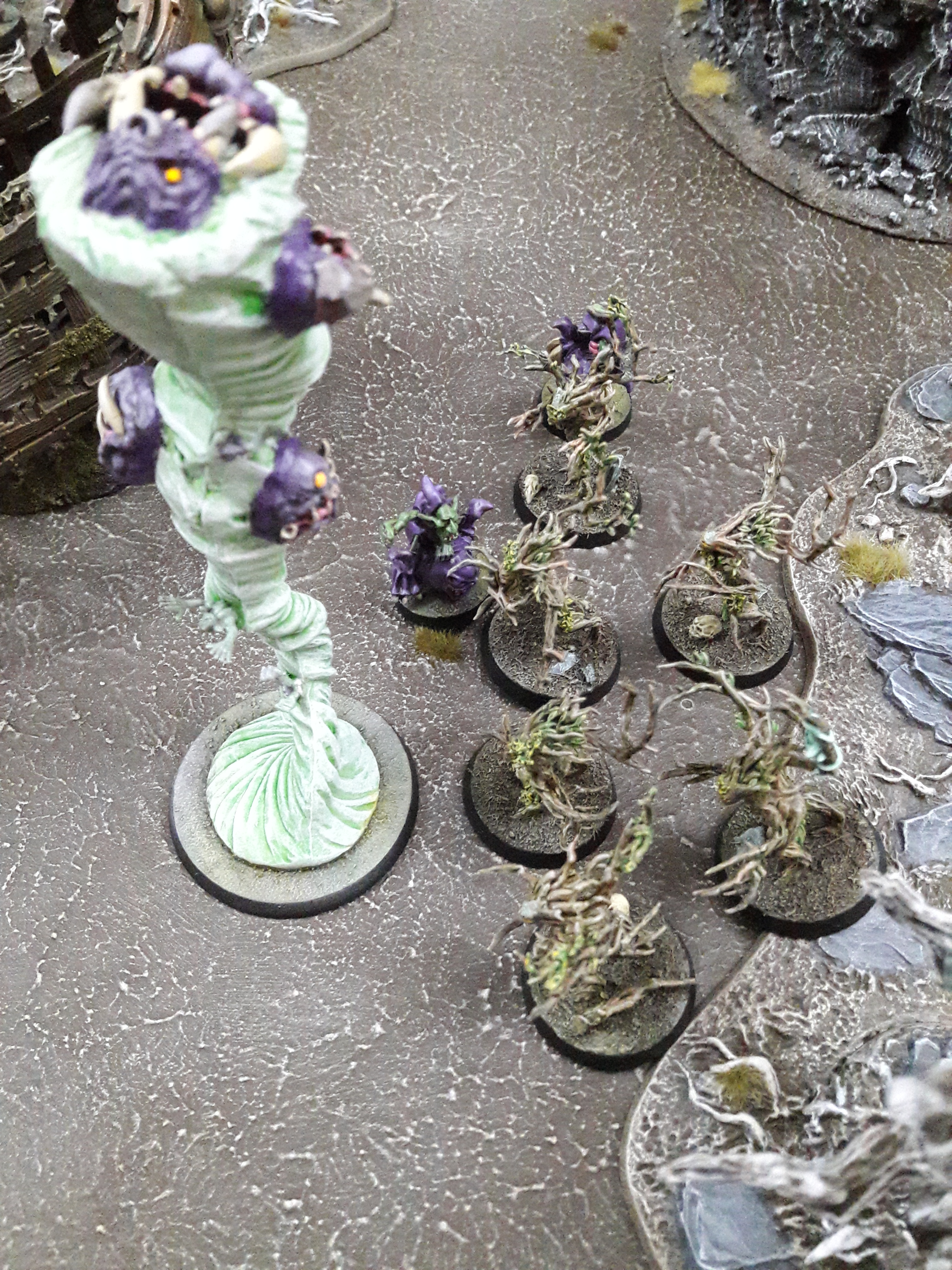 Braving the hazardous Squig winds, the Sylvaneth managed to ‘aim’ the endless spell towards the oncoming Moonclan warband – resulting in three Shootas and a Squig becoming part of the violent vortex! Enraged at what he saw as his own weapon being turned against him, Barooga unleashed an Arcane Bolt at the Dryads, burning one to a crisp as the two surviving archers’ shots went wide. The two Squigs not already in combat charged into a Dryad and the Kurnoth Hunter, but the latter was Trampled Underfoot. Another Squig and a Hopper were wounded by Dryads, for the loss of one Dryad in return. With significant losses this turn, three of the Squigs and a Shoota fled the battlefield; the Squigs Going Wild and taking two of the Dryads down with them. Amadriel cast a spell of Regrowth on herself, recovering one of the wounds inflicted last turn. Three of the Dryads charged into the Squig Hoppers, causing one wound but losing one of their number in combat and a second one fleeing. 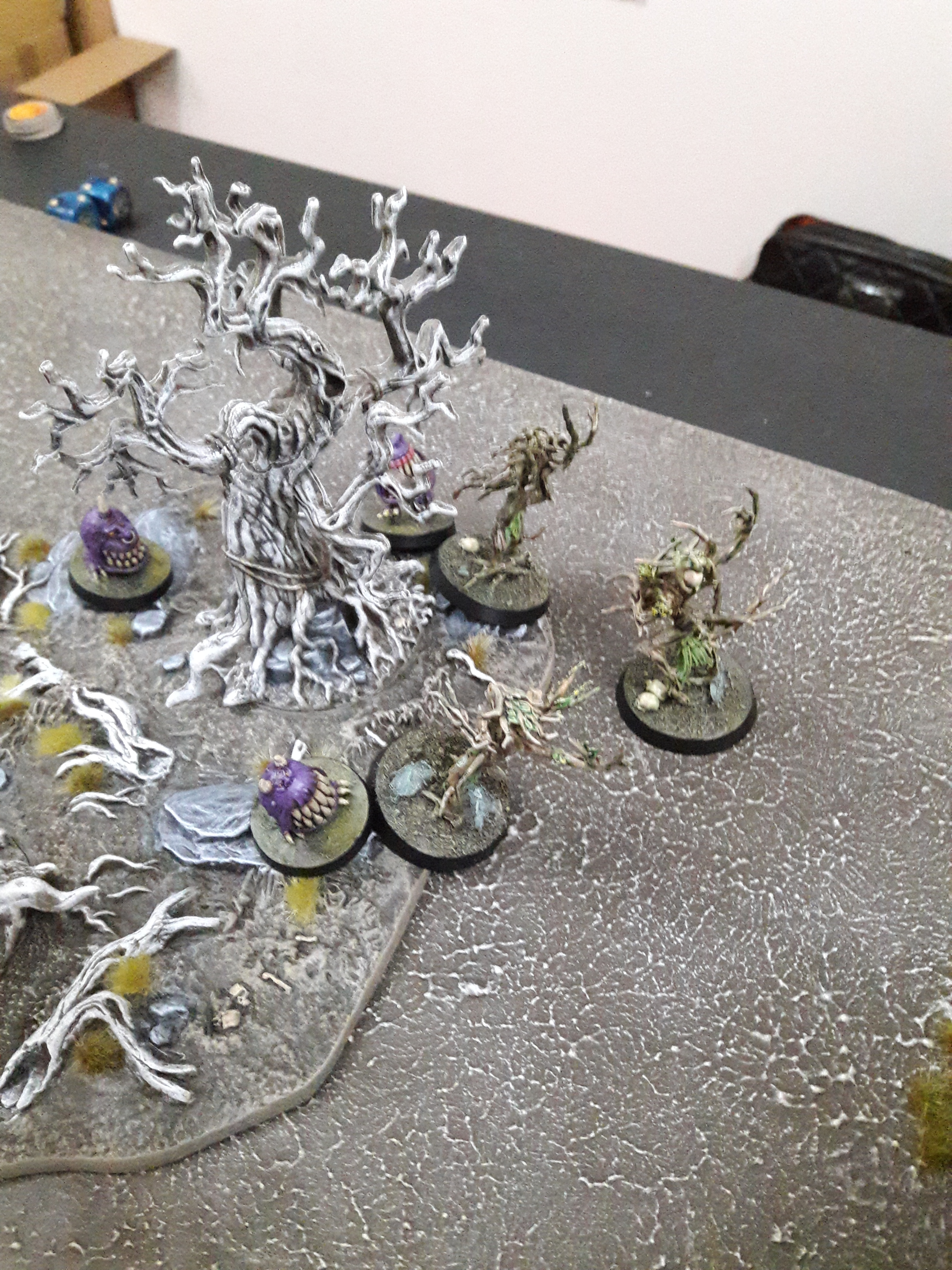 The Sylvaneth ‘directed’ the Squignado towards the abandoned ship in the centre of the battlefield, as Barooga and his Shoota buddy tried to capture it. Another Dryad fell to an Arcane Bolt from the Shaman, and another was brought low by his Moon Staff as the rest of the combats fought to a standstill. Amadriel advanced and reciprocated with an Arcane Bolt of her own, but it was dispelled by Barooga [who rolled a 10 to beat her casting roll of 9!]. The Kurnoth Hunter picked off the two wounded Squig Hoppers at range before charging Forward to Victory into the Shaman. It must have exerted itself too much though [re-rolling to get a 12″ charge], as it failed to even hit the diminutive wizard [rolling three 1’s to hit!]. The last archer was killed by a Dryad, but then another Dryad fled. 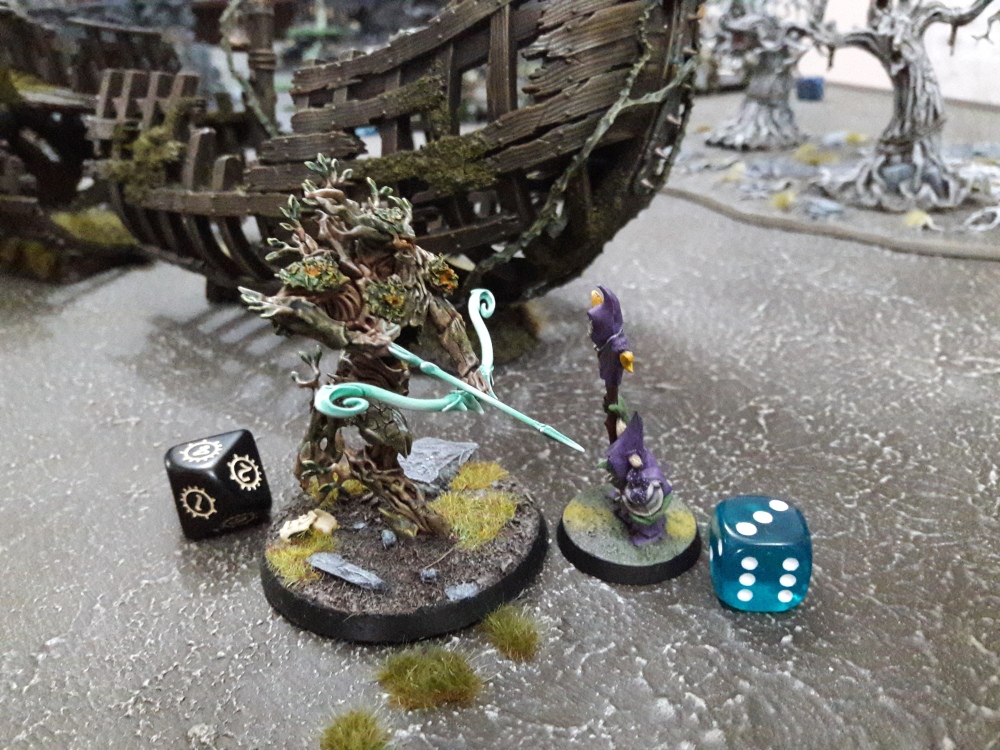 The Squignado wound its way around the few remaining Sylvaneth towards the sole surviving Goblin, wounding him once. Fighting for his life, Barooga wounded the Kurnoth Hunter with an Arcane Bolt before attacking it twice [thanks to Destruction’s Allegiance Ability] and causing a further three wounds [leaving it with just one remaining!]. His success was short-lived however, as Amadriel cast her spell of Regrowth on the Hunter, healing three of its wounds. She then charged in to aid the Hunter, who wounded Barooga with its bow and sword. The Shaman wounded the Hunter yet again, but still failed to finish it off. 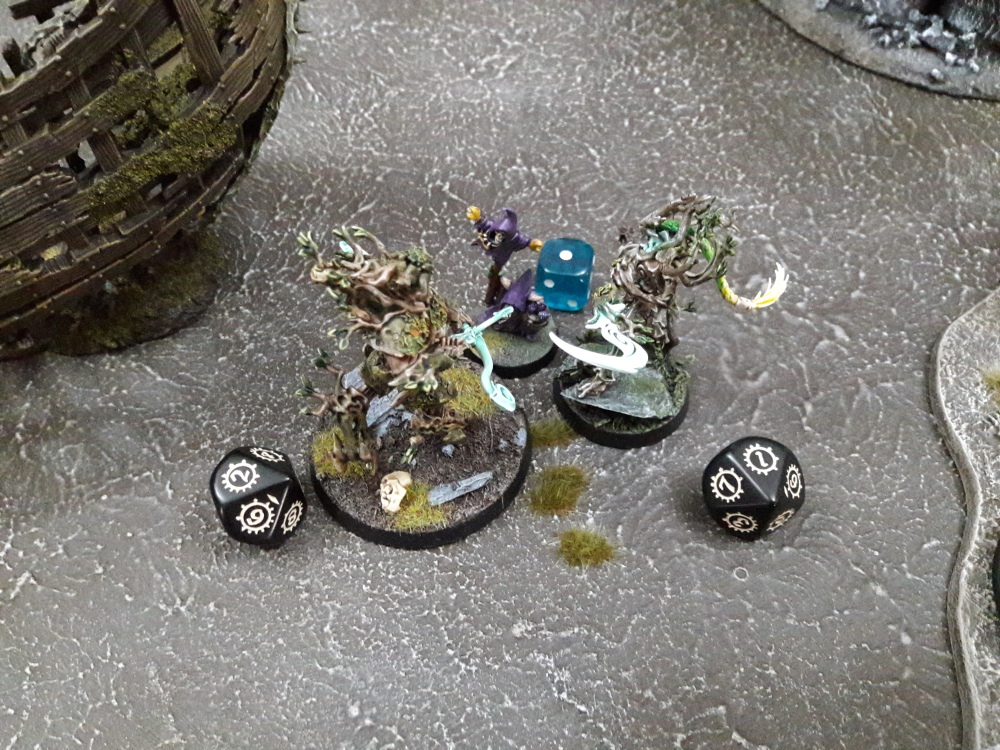 As the Squignado spun off towards the ship again, Barooga made his last stand. A powerful Arcane Bolt caused two wounds on the Hunter [reducing it to one again], but he couldn’t follow it up with his Moon Staff and Amadriel laid him low with her Greenwood Scythe.

That was a much closer game than I thought it would be after my initial losses. My Madcap Shaman managed to survive against the odds for some time, and would’ve killed off Ross’ big guy too if it wasn’t for a well-timed healing spell…