Greetings, fellow humans! This week, I have mostly been typing up a four player battle report from our recent gaming weekend.

Ross, Sander, Danny and I played the Argument of Kings battleplan from the Age of Sigmar Core Book. There was an objective placed in the centre of each sixth of the battlefield, in addition to victory points being awarded for inflicting multiples of 5 wounds in each phase. 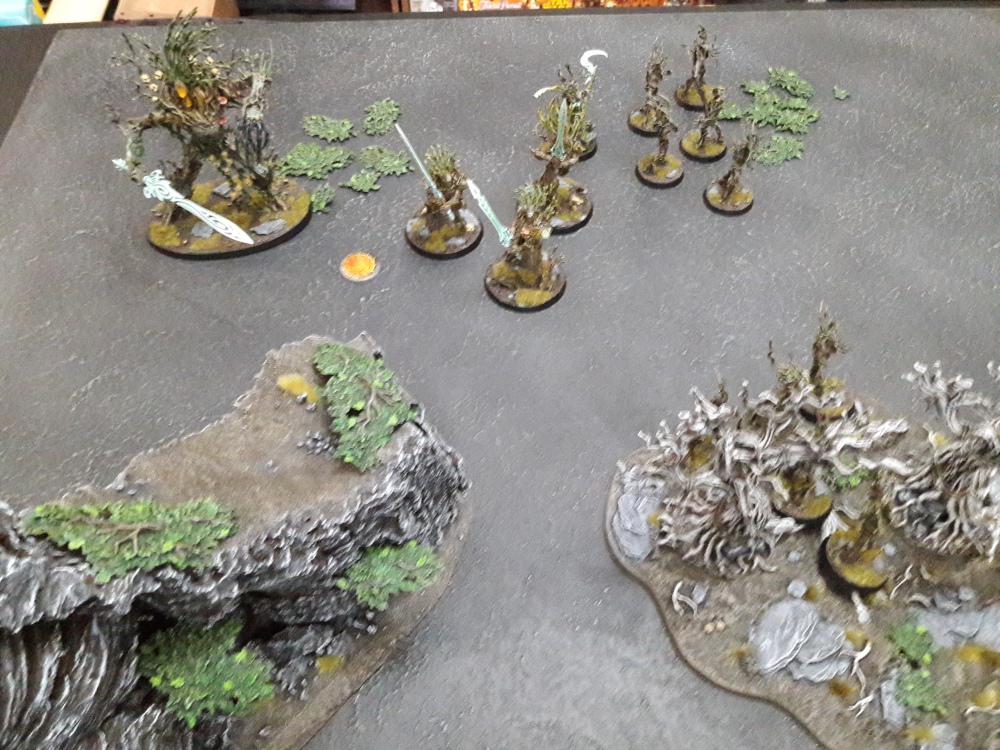 Thanks to the aggressive placement of the Gloomspite Gitz and Sylvaneth, the Seraphon were forced to deploy in a rather narrow column so as to not start too close to their opponents. On the other hand, the Legion of Blood had no such restrictions due to having either side of their half of battlefield empty. 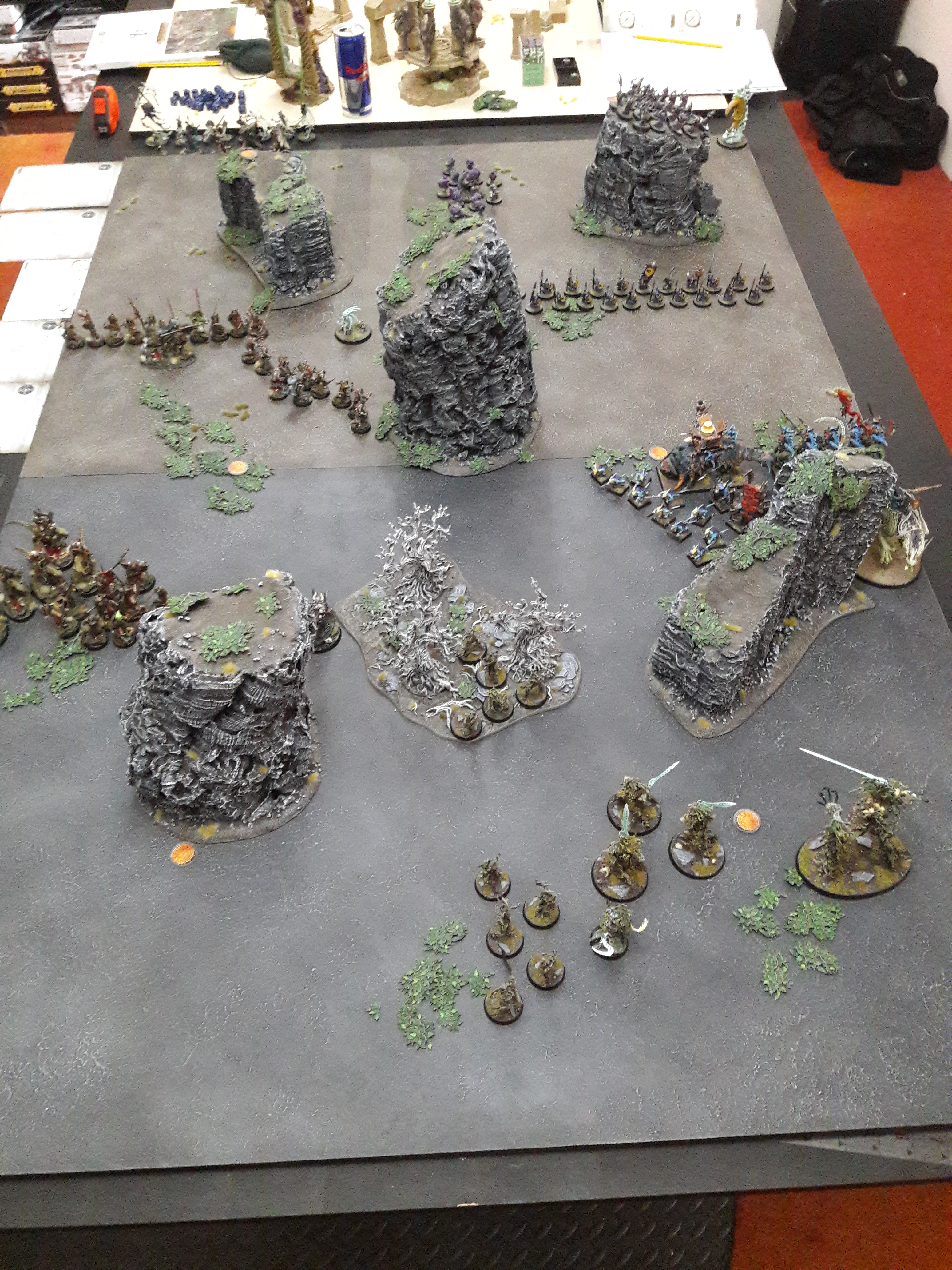 The Seraphon went first; the Starpriest enchanting the nearby Saurus Cavalry with its Serpent Staff and Summon Starlight spells. The Engine of the Gods [dubbed ‘the lascannon’] opened fire on the Shootas on the high ground and promptly fried ten of them! The skinks on its howdah (as well as those on foot) launched their javelins at the Stabbas in front of them, but none of them were successful. The Troglodon sprayed at the Squig Hoppers, killing one of them with its Noxious Spittle. The Saurus Knights charged at the Stabbas, only to be met with a screen of Loonsmasha Fanatics! Despite the element of surprise however, the crazed Grots only managed to kill one Knight. The shocked cavalry were left reeling though, only causing a single casualty themselves [with two Fanatics making their 6+ saves!]. The losses took their toll on the Squig Hoppers and Shootas, with two Squig Hoppers and six Shootas fleeing.

Next up were the undead. The Wight King used his Shadeglass Decanter on the Branchwych, causing a Mortal Wound. The Vampire Lord failed to charge the Loonboss, but the Ghouls managed to reach the Moonclan leader and nearby Stabbas and Squig Hoppers. Two of the Ghouls failed to hurt the rank and file, but the other eight managed to wound the Loonboss three times. The Gobbos struck back hard though, accounting for seven Ghouls between them. 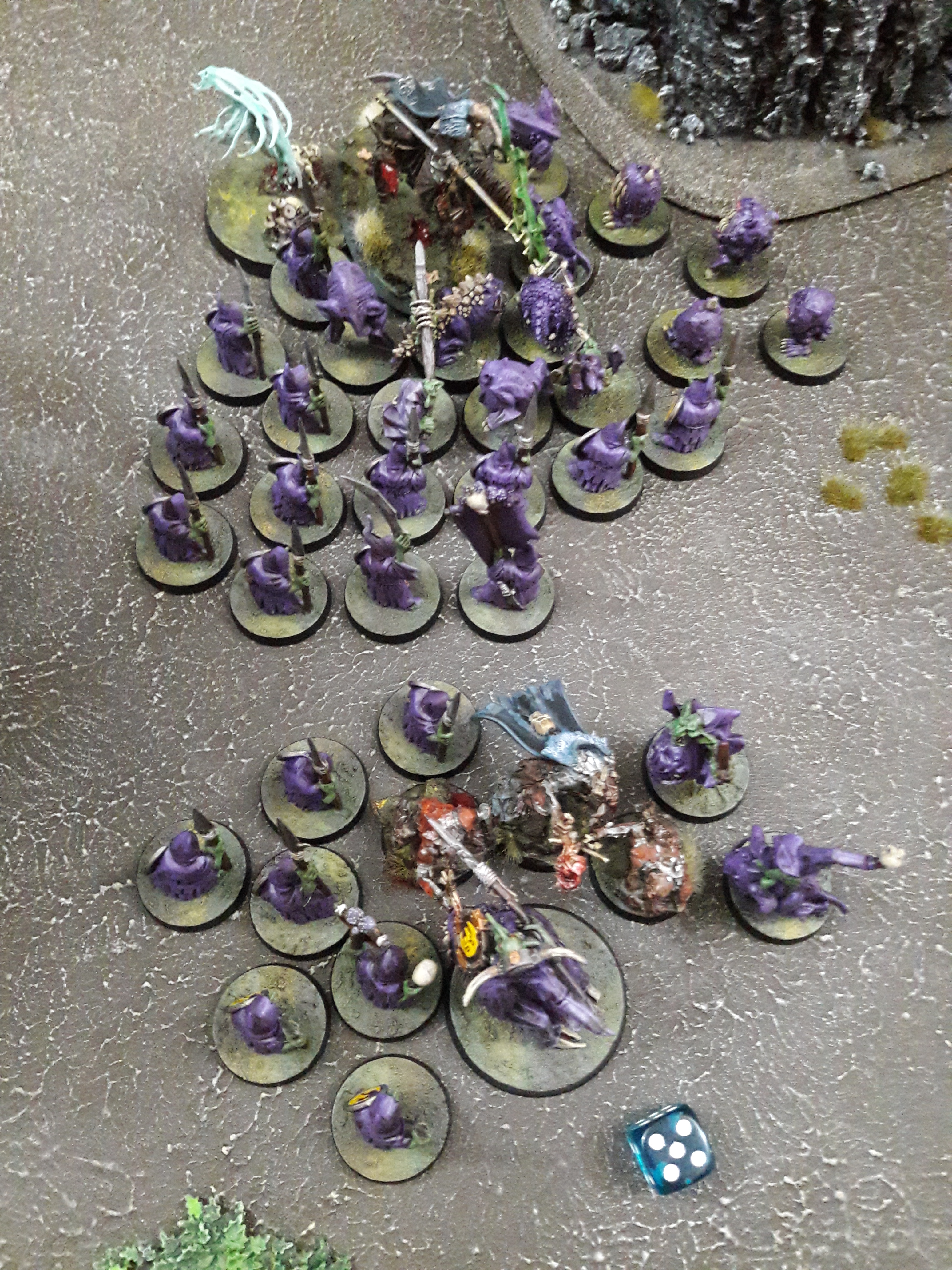 The Squigs and Stabbas (who were no longer engaged with the Ghouls) advanced towards the rather lonely-looking Vampire Lord as the few surviving Shootas failed to hit him. The Squigs caused four wounds and the Stabbas a further two; biting and poking the enemy leader to death in a shocking turn of events! The Loonboss also finished off the last three Ghouls. Unfortunately, the Vampire Lord managed to kill a Squig before he died (again), leaving the remaining Squigs Going Wild as they gobbled up two Stabbas as they fled the battlefield!

The Sylvaneth finished up the battle round by the Branchwych casting her Regrowth spell to heal the wound that she suffered at the hands of the Wight King’s Shadeglass Decanter, and then casting Verdant Blessing make a Wyldwood appear. The Treelord killed a Skeleton at range with its Strangleroots, but the Kurnoth Hunters failed their charge.

The Bad Moon rose over the Gitz’ corner of the battlefield, as the Seraphon made their move again. This turn, the Starpriest used its Serpent Staff on the Troglodon, and Summon Starlight on the Saurus Guard. Thus empowered, both units advanced towards the Treelord. The Engine of the Gods must have spent its energy last turn, as it caused no damage to the Stabbas this turn [rolling just three hits, and all of them missing]. We put it down to the Bad Moon draining its solar power. Its crew’s javelins fared better though, bringing down a Fanatic. The Skinks on foot couldn’t match the success of their mounted counterparts however, and the Troglodon also failed to dissolve any of them with its Noxious Spittle. The Troglodon had to be urged Forward to Victory to reach the Treelord, but the Saurus managed to charge in of their own accord. The Troglodon caused two wounds to the Treelord with its Venomous Bite, who in turn killed two Saurus with its Sweeping Blows. The Saurus responded in kind by further wounding the Treelord, but then the nearby Kurnoth Hunters and Tree Revenants piled in a caused a brutal six wounds to the Troglodon! 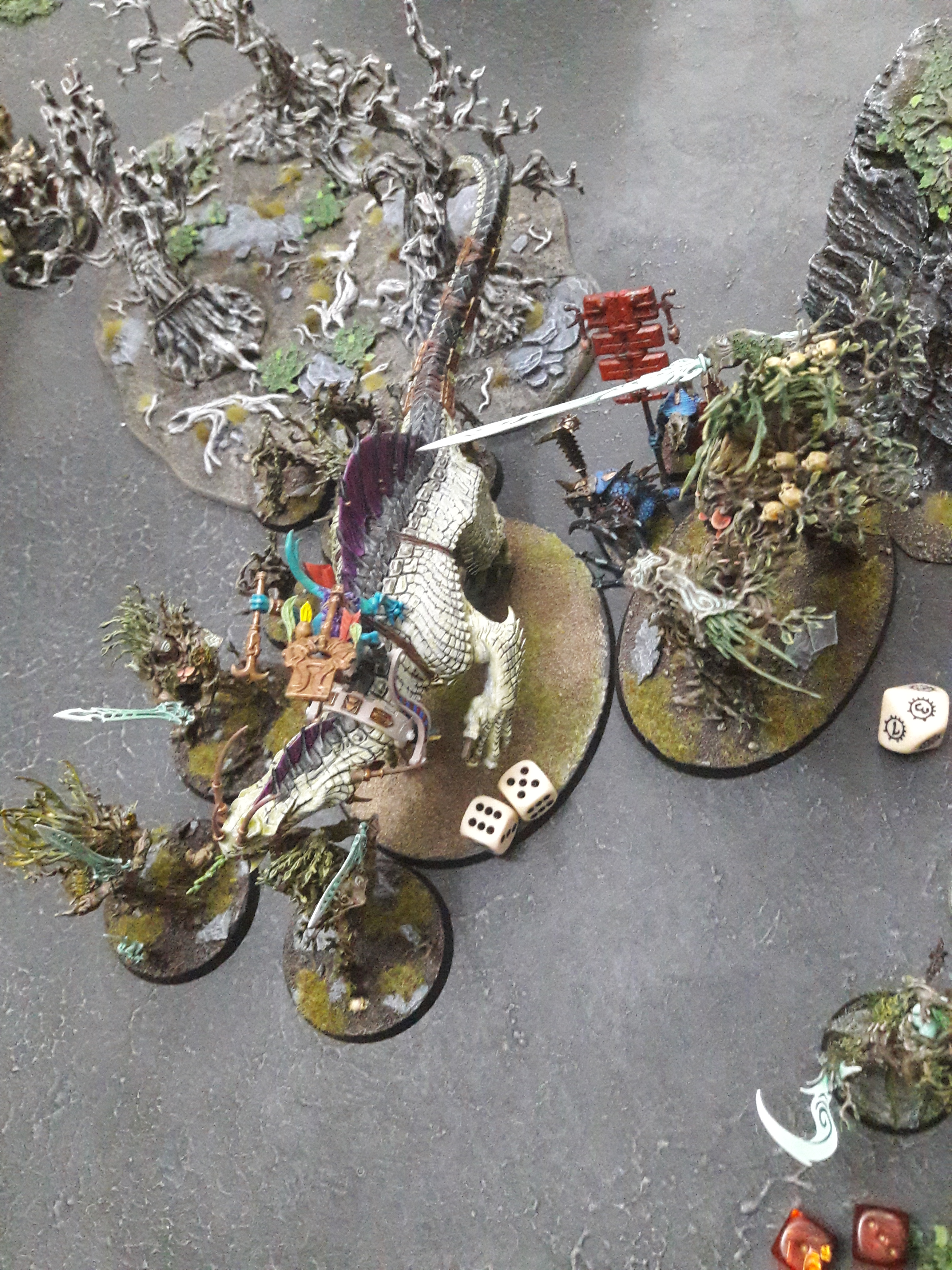 The light of the Bad Moon continued to affect the Seraphon, causing one Skink to keel over after spontaneously erupting with a growth of mushrooms. The Shootas missed the Bastiladon as the Fanatics continued to whirl harmlessly around the Saurus Knights. The Loonboss chomped down a Redcap Mushroom to boost his fighting prowess, subsequently causing four wounds to the Bastiladon (including two from his Backstabba’s Blade). The Bastiladon took great offence at this, and promptly swatted the Loonboss dead with its Bludgeoning Tail (taking his five remaining wounds)! The Starpriest missed a Squig Hopper and suffered a wound in return, as the Stabbas cut down three of his fellows for the loss of one of their own. The Saurus Knights had recovered their wits this turn, and managed to put an end to the Fanatics.

Keen to finish what they started, the Sylvaneth prepared for war. The Treelord healed two of its wounds thanks to the Gift of Ghyran, and was further bolstered by a Mystic Shield from the Branchwych who also unleashed her Spites [not the bees!]. The Spites were out in force [thanks to a casting roll of 11], resulting in two dead Saurus and another three wounds for the Troglodon. The Kurnoth Hunters then inflicted another ten wounds, well and truly slaying the beast. Shocked at the loss of such a monster, the Saurus Guard faltered and was struck down by the Treelord.

The Wight King caused another Mortal Wound on the Branchwych with his Shadeglass Decanter, while the Skeletons charged the Squig Herd. They only managed to kill a single Squig for the loss of three of their own, but this was enough to cause another Squig to Go Wild, resulting in another dead (again) Skeleton.

Unfortunately, we had to end the game there, so we counted up our victory points based on wounds inflicted. The Gloomspite and Seraphon had three victory points each, but the Sylvaneth just pipped them to the post with four! We didn’t add in the victory points from the objectives, but we reckon that it probably would’ve brought us all up to a similar level – as the forces of Death would’ve claimed the majority of them.

It was a fun game, and using the Triumph and Treachery rules meant having to think very carefully about which player to declare as your opponent for each phase. I’m sure we’ll have plenty more multi-player games in the future, but I think we’ll probably aim for more doubles games – as teaming up with someone is a lot of fun.