Greetings, fellow humans! This week, I have mostly been typing up another battle report from our recent Meeting Engagement weekend.

Ross and I played the Borderline battleplan from the General’s Handbook 2019. This battleplan had three objectives spread across a diagonal deployment, with victory points being awarded for claiming them and also for causing more wounds (from slain models) than your opponent. It also had a different deployment sequence (Main Body then Spearhead then Rearguard) and smaller deployment zones. Ross put his Place of Power in the ruins on my side of the board, and I once again struggled to deploy my horde of Stabbas in my small deployment zone.

I won the roll off for the first turn, so my Madcap Shaman summoned a Squignado to race towards the furthest corner objective to deter any Sylvaneth that might try to claim it. The Shaman and Stabbas then ran towards then central objective as the Spearhead of Loonboss and Sqiug Hoppers made their way onto the battlefield. In response, the Spirit of Durthu advanced purposefully as the Dryads ran towards the central objective, their burst of speed [a 6″ run] enabling them to wrest control from the Gobbos [having 10 models in range compared to the Stabbas’ 9!]. Durthu thinned out the Grots’ numbers with a Verdant Blast (killing two of them), but was too far away to wade in and finish the job. Thanks to their rank bonus and Moonclan Flag however, there was no fleeing from the terrifying tree. Reinforcements arrived for the Sylvaneth in the form of a Branchwych and the bow-armed Kurnoth Hunters.

The Bad Moon rose above the first quarter of the battlefield as the Squignado spun harmlessly away from the objective. One of the Dryads crumbled to kindling at the presence of the evil celestial body. The Shaman aimed the Green Great Spite of the nearby Stabbas at Durthu, wounding it twice. The Dead Shouty Loonboss told the Squig Hoppers Let’s Get Bouncing!, which gave them the inspiration they needed to head towards the corner objective [with an impressive 18″ movement]. The Loonboss advance along the nearby ruins a bit more cautiously [with a mere 6″ movement]. The Stabbas charged the Dryads, allowing the Shaman to retreat to a safe position in another ruin. Despite having nearly half of their unit in poking range, the Stabbas only managed to bring down a pair of Dryads. The Dryads were ineffective in return however, causing only a single wound [after I passed seven out of my eight 5+ saves!].

Thanks to the nearby Place of Power, the Dryads held their ground along with the Grots. At the end of the turn, the Gloomspite Rearguard just about managed to cram themselves into their tiny deployment zone [which Ross generously allowed]. 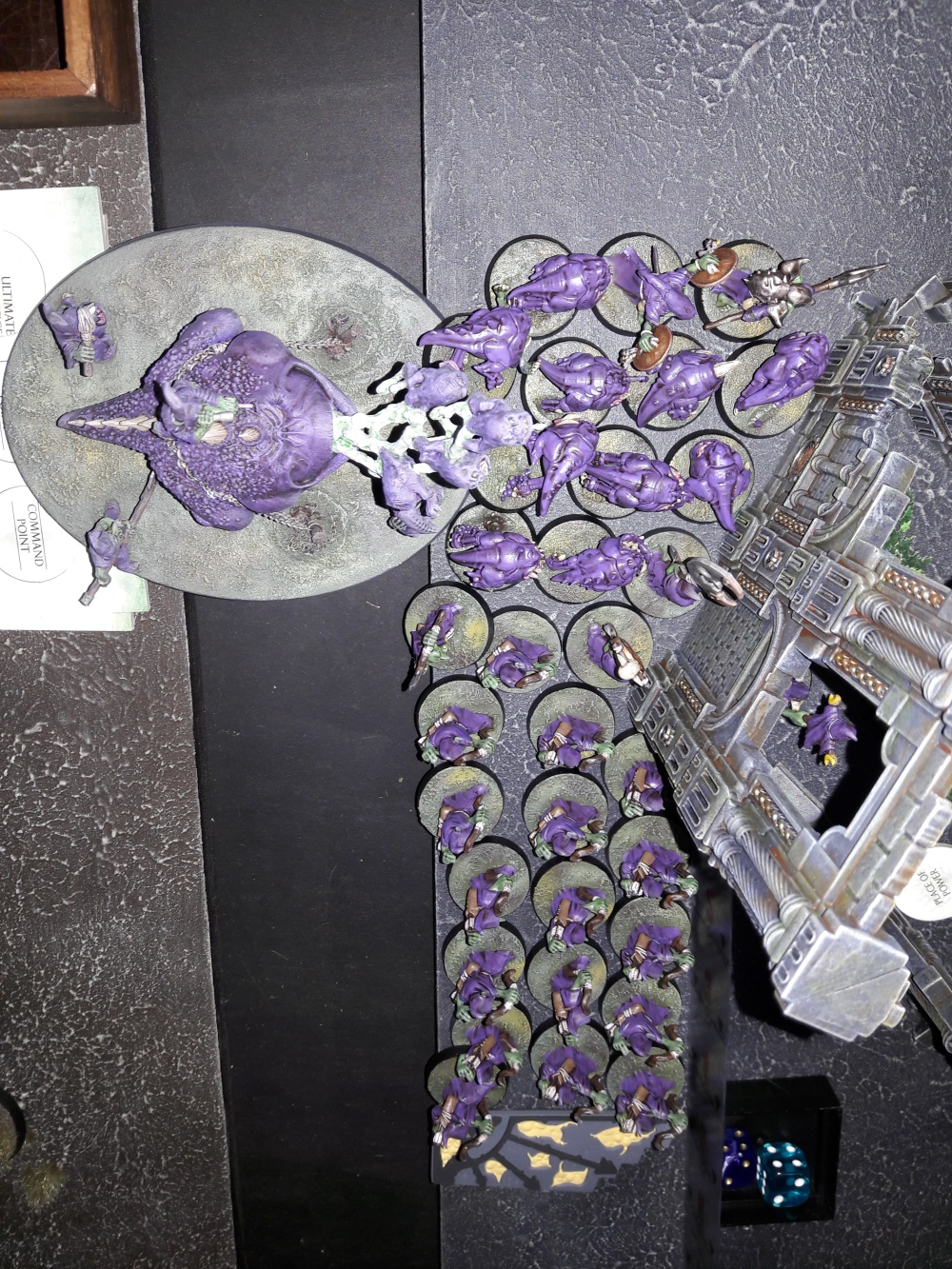 In the Sylvaneth turn, the Branchwych failed to heal Durthu before heading towards the scrum around the central objective. The Kurnoth Hunters headed towards their nearest objective as Durthu lined up for a charge. A Verdant Blast from Durthu felled another Gobbo and the Hunters took down three Squigs. Then the tree people took things up a notch, with Durthu charging the Stabbas and causing a brutal nineteen wounds! 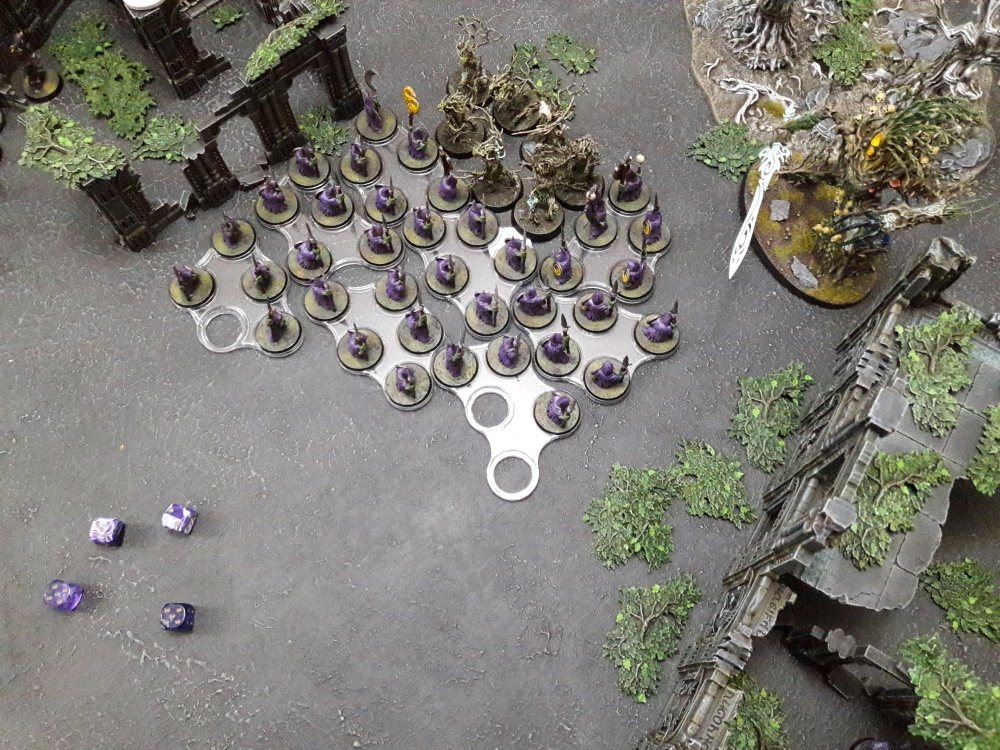 The remaining Stabbas managed to kill a Dryad before the smaller trees killed another four Gobbos. Unfortunately for me, due to my Shaman’s cowardly actions, the Stabbas weren’t in range to benefit from his Inspiring Presence, so the thirteen survivors fled. The Squig Herd were close enough to benefit however, so they stayed put (and didn’t gobble up any of my Shootas). The Sylvaneth Rearguard arrived by the objective held by the Squig Hoppers.

The Bad Moon moved to the centre of the battlefield, wounding Durthu with its baleful light. It didn’t prevent the Squignado from spinning back towards the Squig Hoppers though, killing one and wounding another. Despite bathing in the Bad Moon’s glow, the Shaman failed to utilise the Green Great Spite of the nearby Shootas. The four surviving Squig Hoppers bounced over Durthu, each of them causing a mortal wound! The Loonboss headed towards the objective that they left behind, the Squig Herd ran towards the objective held by the Hunters with bows and the Shootas made for the gap left by the Stabbas in the centre – wounding Durthu twice as they went. The Squig Gobba took aim at the Hunters with bows, but only caused a single wound. There was a lot of combat this turn: the Loonboss killed four of the five Tree Revenants and took three wounds in return; the Dryads and Squig Hoppers killed one apiece; and the Squig Herd killed a Kurnoth Hunter for the loss of six (the two slain caused another four to flee, none of which caused any wounds on their way). Despite this carnage, everyone else passed their battleshock tests! 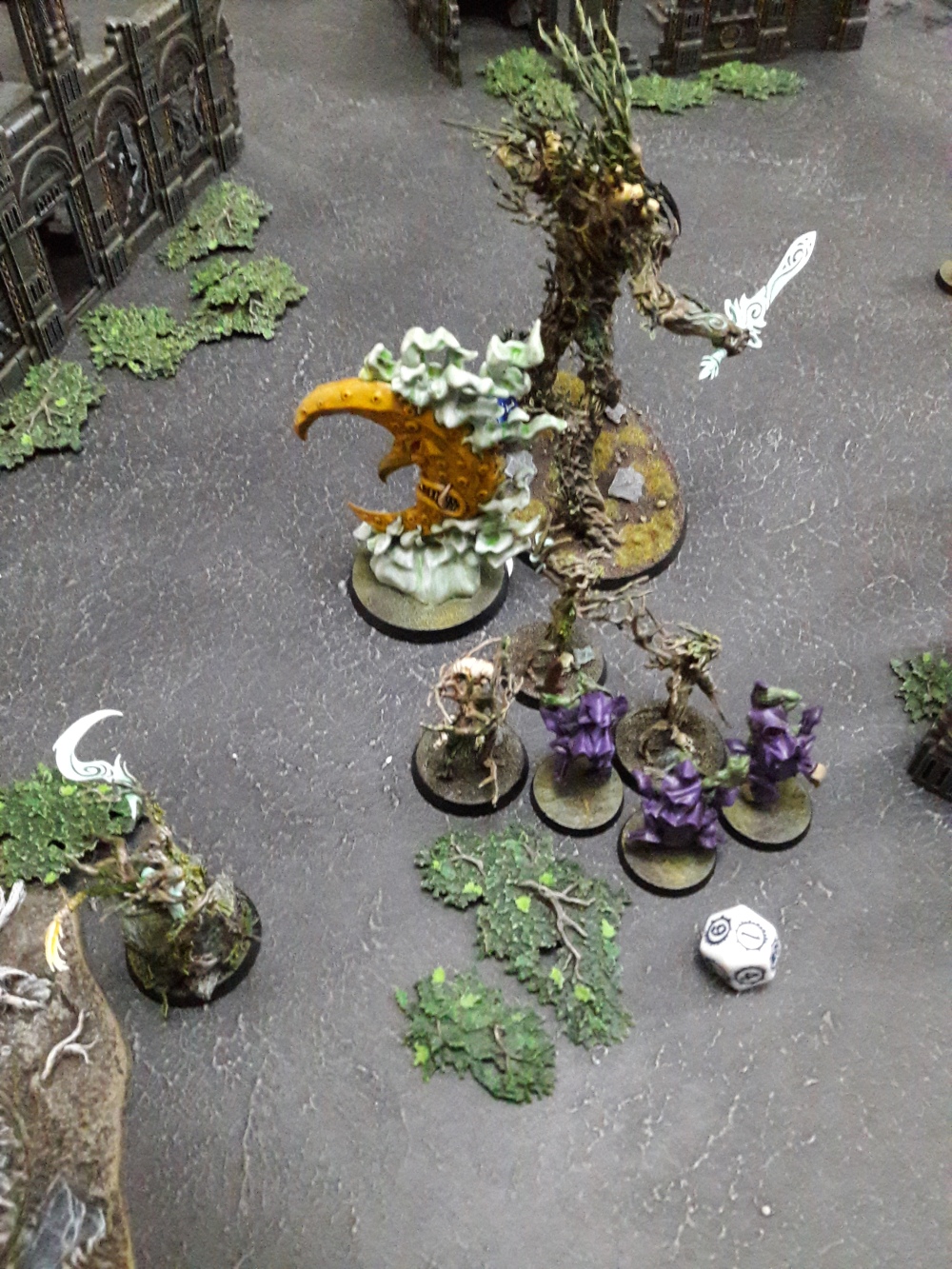 In the final battle round the Squignado swept up the last Tree Revenant and caused two wounds to one of the Kurnoth Hunters, as the Branchwych showed her consistency by failed to provide any healing for her allies. The Dryads and Branchwych advanced on the Shaman while Durthu made to engage the Shootas. The Hunters with bows shot down the Squig Gobba at point blank range as a Verdant Blast cut down three of the Moonclan. Having slain their opponent, the Hunters joined Durthu in charging the archers, killing half a dozen between them. The Shaman managed to fend off his attackers, but was badly wounded by the Dryads. The Shootas were close enough to his Inspiring Presence though, so they fought on. The Hunters with swords managed to charge the Loonboss this time, cutting him down with their Sundering Strikes.

Sensing that the end was nigh, the Shaman scoffed a Madcap Mushroom allowing him to launch an Arcane Bolt at the Dryads and attempting (but failing) to harness the Great Green Spite. The Shootas killed a wounded Hunter with their bows and then wounded another in combat, but two of their number were cut down by Dryads and a third fled. The result: a major victory for the Sylvaneth!

This was another brutal game. After (just!) failing to claim the central objective in the first battle round I was on the backfoot for the whole game. I couldn’t kill enough of Ross’ multi-wound beasties to really get on the wounds scoreboard, and losing my main unit in pretty much one turn was the nail in the coffin. After this game, I definitely think that hordes are a hindrance in Meeting Engagements, and smaller units of tougher/multi-wound models are the way to go. I reckon my Ironjawz would be a good faction to try next time.