Greetings, fellow humans! This week, I have mostly been typing up a Warcry battle report from our recent Meeting Engagement weekend.

This was my first game of Warcry so for my warband I simply picked a mixture of models were available to me and hoped for the best! Ross, Sander and I used a double-sized playing area to accommodate the three of us, which in hindsight we thought was quite large. We each had an objective to place, and they were spaced fairly evenly along the right hand side of the board.

The Nighthaunt took the initiative in the first turn, with the Tomb Banshee floating towards the top objective. A pair of Grave Guard headed for the central objective as a Stabba advanced towards the cemetary gates. A Shoota wounded one of the skeletons, while the Squig Hopper bounced over the walls to attack as well, causing four wounds. 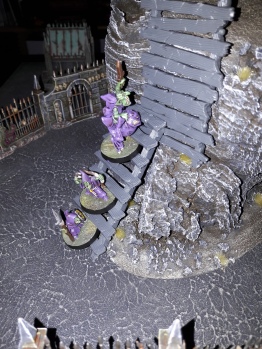 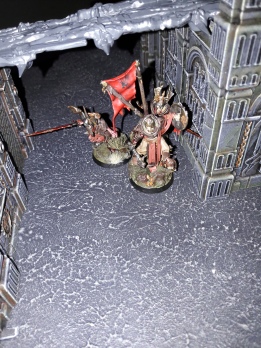 We all deployed our next wave of warriors in our respective corners, with the Nighthaunt taking the initiative once again.

The Tomb Banshee used her ranged attack on a Grave Guard (causing six wounds) and the Squig Hopper scored a regular hit and a critical hit on the skeleton that he was fighting (also causing six wounds). The Shoota caused a further two wounds on the unfortunate individual. Most of the rest of the models advanced towards their nearest objectives, but the Stabba poked his spear through the gate at a skeleton (wounding it twice) and the wounded Grave Guard fought back at the Squig Hopper (causing nine wounds).

The remainder of our warbands arrived ready for the final turn, which saw the Squig Hopper cut down by the Grave Guard and a different skeleton brought low by a Backstabbing Mob of Stabbas.

The Boingrot Bounder Boss used his Boing! Boing! Boing! ability to bounce into the centre of the battlefield (causing two wounds on a nearby skeleton). The Gitz by the bottom objective clambered over the walls and dropped down the other side ready to fight off anybody who got in their way, but only managed to wound the Necromancer. The skeletons defeated a Chainrasp, but it was promptly brought back into play by the Guardian of Souls’ Spectral Summons. As the dust settled, the Nighthaunt were the clear (transparent?) winners, with twice as many victory points as Sander and me.

That was a fun little game. It reminded me of Necromunda, with its smaller scale and alternative activations. I thought the basics were good, with the hit/wound/save/damage process rolled into one, and high wounds characteristics meaning that most models don’t get killed straight away. There was a fair amount of bookkeeping though, with lots of counters being used and dice being set aside. I think that it’d take a while to get to grips with all of the special abilities too, which I don’t know if I’ll be able to dedicate the time to. I’d certainly play it again, but if I was given a choice of small scale Age of Sigmar games I think I’d stick with the simplicity of Skirmish.