Greetings, fellow humans! This week, I have mostly been basecoating my Bad Moon Loonshrine. Well, I’ve actually been painting it on and off for the past few weeks, but thankfully I had several battle reports to save me from posting three weeks of frustration and minimal progress. 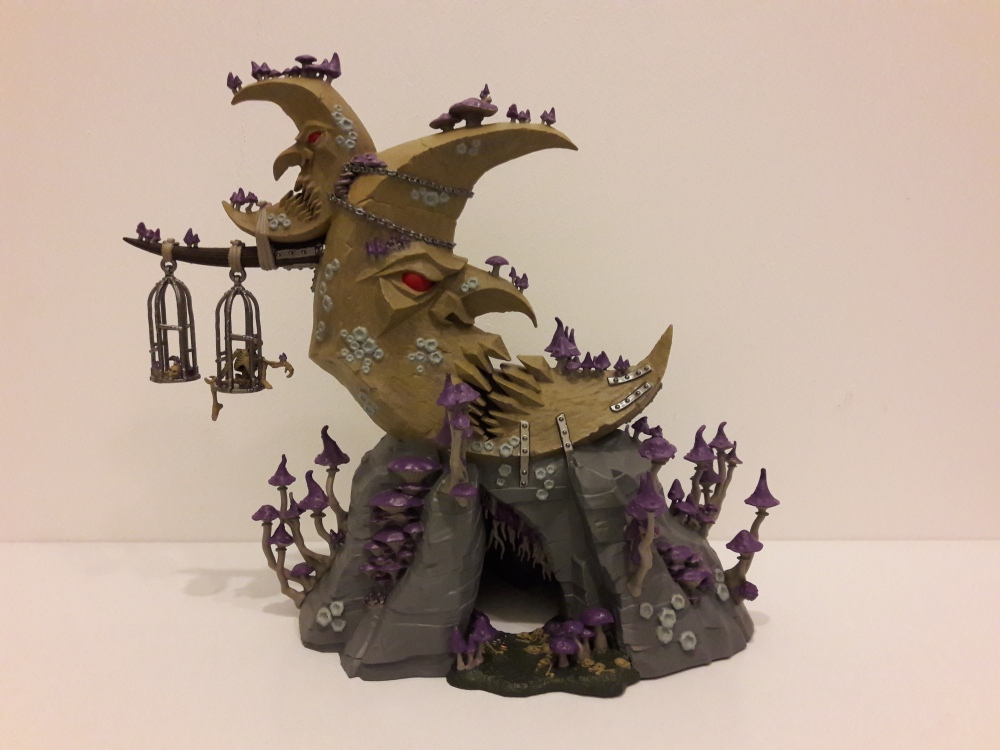 I thought I would keep things simple by just undercoating the whole thing purple to begin with, as it meant that all of the mushrooms didn’t need picking out, just their stalks. In hindsight though, I should have kept them all separate, and basecoated the rocks/moons with their respective colours. Let that be a warning to anyone thinking of tackling their own Loonshrine!

I painted the rocks to match some of the bases/tables/terrain that Ross has painted, and to make the lighter-coloured moons stand out a bit more. I didn’t fancy painting the moons yellow (due to having trouble with large areas of yellow in the past), so I opted for a much easier yellowy-sandstone colour instead (to match my Realmgates). This could do with another coat before I wash things though, as it’s still a bit wishy-washy.

My logic is that anything ‘built’ by my Destruction armies will use sandstone, as opposed to the local brown/grey rocks of the region. For my Moonclan Grots, this will also be an aesthetic choice, due to its closeness in colour to the yellow of the Bad Moon. Here’s my recipe, for anyone who’s interested:

It’s an awesome model, but it’s very fiddly to paint. There’s so much detail that it’s been quite disheartening at times, but I’ll persevere as I’m almost there now. I’ll be glad once it’s finally out of the way; and with it, my Gloomspite Gitz. Well, I’ve still got a few boxes of Troggoths lying around, but I’m saving those for a rainy day…