Greetings, fellow humans! This month, I have mostly been painting Chaos Warriors (or Chaswassers, for short). Being mostly silver meant that they were relatively quick and easy to paint, which is just as well as I’ve got another twenty-five to do at some point! 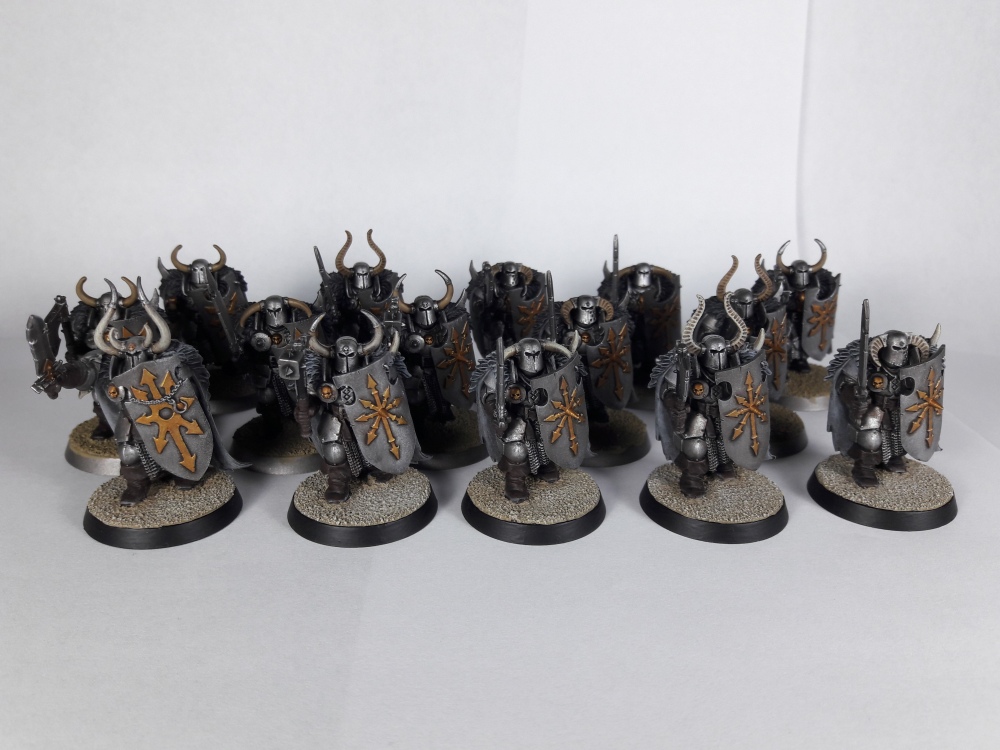 I worked out an assembly plan that would give me a good amount of variety but also be conducive to batch painting. Therefore, I kept each set of bodies, cloaks and shields the same, but then mixed up the heads and weapons to reduce duplicates of these more focal pieces. I also made the deliberate choice to make them a faceless horde to save me having to paint any flesh/eyes (much as I did with my Ardboys). I didn’t quite get them all fully finished (as you may be able to tell from the back rows), but I’m hoping to get them finished off this weekend.

I’ll be heading over to the Aaronorium shortly to get in our first lot of games with our new armies, so I’m hoping that having a relatively large amount of rank and file will see me right. Outnumbering people is a common tactic for my usual horde armies, so at least I’ve got a bit of experience in that respect. We’ll most likely be keeping to some Path to Glory games to allow us to get used to our new units, so expect some battle reports next month.

On a greener note, I built a few Moonclan Grots that Ross kindly donated to me a while ago. I had 40k in mind when I got these, so I’ve kitbashed them into Grotz. I painted up an old Imperial Guard battleforce about a decade ago (grey Cadians in a Starship Troopers colour scheme), and set aside the spares with the idea of using them to convert some Flagellants into a Cawdor gang for Necromunda. Now that Necromunda’s alive and kicking again though, I thought that I’d put these spares to good use elsewhere.

I’ve pimped these guys out quite a bit with various Cadian spares, but I’ll probably go for simpler arm/weapon swaps for the rest of the box. I’ll count these as Runtherds due to their extra gubbinz, and I’ll eventually have them lead a mob of 30 Grotz. I’m currently undecided as to whether to add them to my existing Deathskull army (which is low on Troops), or have them be the start of a new Blood Axe army (which so far consists of an unpainted retro 90’s Battlewagon). Both clans are renowned for their looting, so I’m sure things will work out either way. 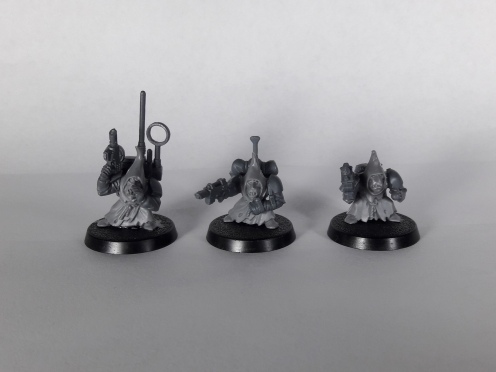